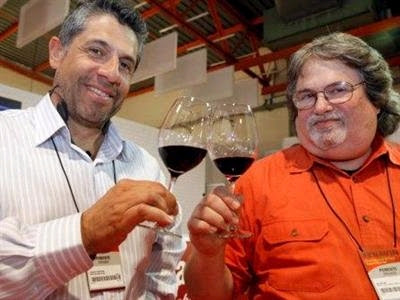 Pancho Campo and Jay Miller
In an interview published today on the Liv-ex blog and then reported in The Drinks Business Robert Parker makes some intriguing comments about the challenges of management and the 'Pay for Access' scandal last year. 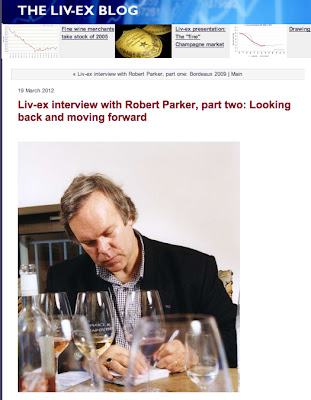 'I did not supervise Jay Miller as effectively as I should have.'
Parker on management and Campo and Miller
'However, he has also recognised the pitfalls of managing more people and blames himself for the Pancho Campo/Jay Miller scandal last year.
He said: "I have to hire and manage people and I'm learning good things and bad things about this. I'm very proud of the people that we have, but I'm still learning the supervisory and communication aspects.
"You always need to communicate exactly what you want. This is the challenge for me – I take part of the blame for what happened with Pancho Campo and Jay Miller in Spain. We haven't seen the final investigative report from our lawyers, but at the end of the day, I feel I did not supervise Jay Miller as effectively as I should have.
"I should have been more diligent in asking question as to what he was doing and I should have scrutinised the way he did things a lot more than I did. Nothing was done that was illegal, but there were some things done that were just...I suppose perception is reality."
The full Drinks Business report is here.
In the Liv-ex post Parker also commented:
'I still think that Spain is very much the sleeping giant of the Mediterranean. It has just unlimited potential. Although they are obviously going through a bad patch with their economy and some of the other problems they have had, such as the scandal involving my former colleague, Jay Miller, and Pancho Campo.'
**
To date I have had no explanation over Robert Parker's mistaken claim that I was 'reluctant to talk with us' nor have I had any request for a meeting.
I emailed Stephen Miller, the investigating attorney who contacted Harold Heckle and myself asking for any relevant documents, on 15th February 2012. I asked him to clarify how Parker had gained the impression that I was 'reluctant to talk'. This email was copied to Parker and to The Wine Advocate. Receiving no response I again emailed Miller on 15th March requesting clarification on this as well as the claim that it had not been possible to set up a face to face meeting with me. Again this was copied to Parker and to The Wine Advocate and again no response nor any acknowledgment received to date.
Posted by Jim's Loire at 13:38

Anon. No sign of an apology or indeed any communication.

They are too arrogant to admit they are embarrassed and give you the simple courtesy of an answer if not an apology. That’s the way Wine 1.0 rolls.

Wow! Parker now admitting it was a scandal. That is a significant about-turn. I still doubt you'll get an apology or even a reponse - not in the man's style I'm afraid.

"You always need to communicate exactly what you want. This is the challenge for me – I take part of the blame for what happened with Pancho Campo and Jay Miller in Spain."