Baile's verdict on Oddbins – 'calling himself an arse'? 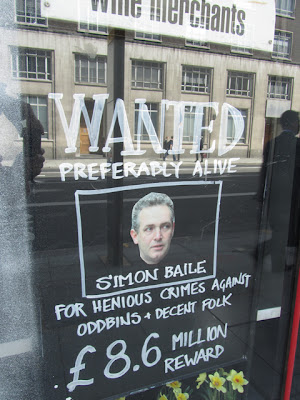 On Friday The Drinks Business carried an exclusive interview (Baile: Back end "killed' Oddbins) with Simon Baile, formerly managing director of x-bins. Baile explains that Oddbins failed not because of the shops but because of the "back end of the business". They had a lot of fixed contracts and couldn't cover the costs.
Baile's interview prompted a classic response from a member of the wine forum on Tom Cannavan's wine pages: 'Simon Baile's calling himself an arse? Sounds remarkably honest.'
Baile's comments rather confirm that Baile and his partners hadn't done their due diligence properly when they took over Oddbins in 2008. If fixed contracts were the problem why did Baile's Oddbins rack up debts well in excess of £20 million, while assuring suppliers that they would be paid? Remembering that £8.4 million of that is owed to the UK Government – ie you and me.
Baile goes on to talk about his newly expanded ExCellar business. 'As would be expected, it hasn’t been straightforward securing suppliers. “Some have been supportive, others less so – they know who they are,” Baile said.'
Arrogant? Moi?
Fortunately some companies take care over who they supply, otherwise Oddbins' debts might have been even higher. There were a number of companies, such as Bibendum, Patriarche UK and I believe Moët Hennessy, who declined to supply Oddbins well before they went pop. Talking with one of Bibendum's most treasured senior executives it was clear to me that they wouldn't touch Baile's Oddbins with a bargepole. I somehow doubt if they are supplying ExCellars.
Posted by Jim's Loire at 09:12

Nobody wishes ill of anybody in this industry. He now has the responsibility of 9 shops and the employees and suppliers of those 9 shops. Unfortunately with little or no investment in these shops and employing the same business model as he used for Oddbins, I can only see one outcome for this new venture.

The comment about the suppliers shows the arrogance of the man and it has been said elsewhere, it as if he feels the suppliers owe him a living. Trust and respect are commodities Mr Baille appears to have little desire to invest in.

The unflinching arrogance of the man is astounding.
It would make you really angry if it wasn't so flipping pathetic.

He is a bellend.

The fact he managed to buy back most of the unpaid stock he was responsible for not paying must lay very badly on suppliers and producers minds. I find the arrogance of the man something I find and hopefully anyone who may deal with in the future something to seriously consider.
He made me redundant and i still fully blame him for my situation. I'm still so bitter about it that if i saw him and his chinless wetlip face i would be affraid of what I would do.
Mr Baile you are a disgrace you made mine, my staff and my many friends harder than it should have been, whilst you winge about your forthcomings.
Shame on you and Henry.

Unsold stock should belong to the supplier if they hadnt received payment for it.

The administrators should arrange for sales income to be returned to the suppliers.

Anon. Sounds logical to me.