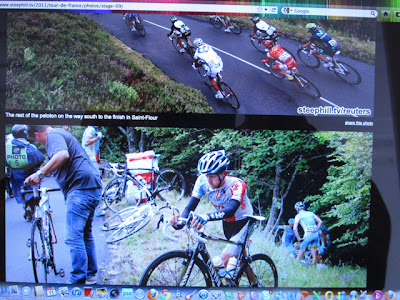 2011 Tour: the peloton and the crash: pic of photos on laptop from steephilltv/reuters
Yesterday's stage Massif Central stage certainly proved to be much more dramatic and incident packed than anticipated. Sorry to see Vinokourov's Tour end, and probably his career, on the descent from Le Puy Mary. The lethal combination of a fast descent on wet and dry roads caused a big crash, which also took out Van den Broeck. Then there was the crazy driving incident that knocked Hoogerland and Flecha off their bikes when in the break.
Despite Vinokourov's doping history he was an exciting rider – one of the few potential leaders prepared to have a real go. Sadly there are too many who prefer to ply the cat and mouse waiting game – the percentage men.
Good to see Thomas Voeckler get the Yellow Jersey – he certainly deserved it from the amount of work he put in during the breakaway. With today being a rest day he should certainly be wearing it on Bastille Day (14th July) – the first day in the Pyrénées as the stages on Tuesday and Wednesday are not particularly difficult – providing there aren't more crashes. Whether Voeckler will still have it at the end of Bastille Day is another matter as the race climbs the Col de Tourmalet and finishes up at Luz-Ardiden. My guess is that this will depend upon whether one or several of the big contenders decides to attack early on or whether they wait for the final climb up to Luz-Ardiden. If it is the latter then Voeckler possibly has a big enough margin (2.26 mins on Cadel Evans) over the favourites to cling onto Yellow.
Philippe Gilbert continues to hoover up points for the Green Jersey leading Rojas by 38 points and Mark Cavendish by 64 points. It will be interesting to see how well Gilbert does in the high mountains as he could be on for a high overall placing as well as looking to be the strong favourite for the Green Jersey.