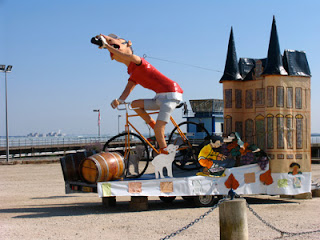 So it all finished in Paris yesterday with many deserved winners!

First Cadel Evans, the Australian to win the race as well as the first person from the southern hemisphere to do so. He proved to be the strongest and most complete rider in the Tour – able to climb, to descend, limit his losses and to put in a great time trial at the end.

It was great to see Mark Cavenish win both the stage and the Green Jersey. Mark is the first person to have won in the final stage on the Champs d'Élysée in three successive years. In the end he beat Rojas comprehensively in the Green Jersey competition – 334 points to 272 points with Philippe Gilbert third on 236 points. On the final stage Mark picked up 54 points out of a possible 65 – nine from the intermediate sprint and 45 with the stage win. In contrast Rojas picked up seven from the intermediate and Gilbert six. Neither Rojas or Gilbert picked up any points in the final sprint.

This win is the fifth stage Cav has won this year and moves him to 20 stage wins. This takes him to 6th= in the list of all time stage winners – equal with Nicolas Frantz. Cav is now only 14 victories behind Eddy Merckx the overall leader with 34. Given that he has amassed 20 wins in just four editions of the Tour, it is a fair probability that he will even overtake the great Eddy. Much credit has to go to Cav's HTC team

Also well deserved was Pierre Rolland's White Jersey (the best young rider) and his prestigious victory on the Alpe d'Huez. Pierre is a good prospect for the future as long as the French don't pile too much pressure on him.

Although Thomas Voeckler didn't hold Yellow to Paris he fought with great style and courage to hold the Yellow for 12 days – many more than I and lots of others thought he would.

Others worthy of mention include Philippe Gilbert, Thors Hushovd, Edvald Boasson Hagen and Jérémy Roy, who made a number of brave escapes but just failed to get a stage win.

Finally the Tour organisers should be congratulated for putting together such a good and testing course.
Posted by Jim's Loire at 13:03

Please, Jim, have a look at www.coumemajou.jimdo.com under the tag “blog” and read the second entry of the day (The End). I’m afraid it was published too soon on this day.

Can anyone suggest a site that does biking tours to view the actual race?