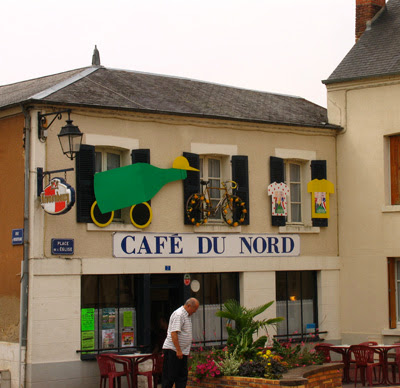 Yesterday's big surprise was that Thor Hushvod was able to keep the leader's Yellow Jersey on the first hilly stage. He was helped by the fact that nobody from the favourites really stepped it up the short, sharp Super-Besse climb to the finish with a leading group of over 20 riders finishing together just behind Rua Alberto Costa, the stage winner, and Philippe Gilbert who broke from the pack at the end.
Gilbert is now back in the Green Jersey and looks a good bet to be the winner of this jersey. Robert Gesink's hold on the White Jersey (young rider) looks a bit shaky after losing time yesterday, so it will be interesting to see how he goes on today's lumpy stage. Having had his BMC team on the front of the peloton for much of the day, it was surprising that Cadel Evans didn't make a bigger effort on the final climb to grab the two seconds he needs from Thor to take the Yellow Jersey.

Today's stage will be hard with eight categorised climbs including three 2nd category ones – Le Puy Mary, Col du Perthus and Col de Pret de Bouc (Le Plomb du Cantal). Although I suspect again that the leading contenders may well be content just to watch each other as the last big climb, le Plomb, is over 50k from the finish. Hope I'm proved wrong. I expect a group of 8-10 riders to break away near the start with some counter-attacks to come in the hilly middle section.
Posted by Jim's Loire at 10:54

True, it doesn’t change anything to the courage and dedication to the job of those poor victims of capitalistic heroism, the racers themselves, but I wonder how people can get enthousiastic about a battle of PHARMACISTS! Give the ranking of the chemists, sport doctors and - more generally - drug providers: that’s the real palmares.

With enormous respect this is 120 carat nonsense, Luc.

Not at all Jim. I repeat those guys are supernatural human mechanics and they command our respect for their suffering. BUT ... it is a scandal fellow human beings can be submitted to such practices. Mind you, it applies to all (or almost all) professional sports (and rugby very much so as well). Everybody knows it, sees it and nobody reacts. How can one be so devoted to a “natural” approach of the vineyard – rightly so if you ask me – and accept the ubiquitous doping in many human activities? I find it shocking.

Luc. If it was the case that the peloton were all doped then I might well agree. I think and hope that cycling is cleaner now than it has been for many years.