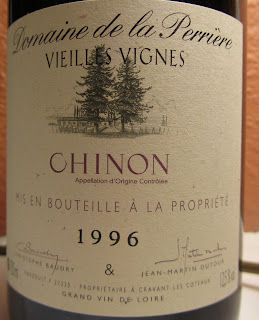 
Tasting of some 2010 Loires at the RSJ Restaurant (Waterloo, London) on Monday evening
For me one of the stars was the 1996 Chinon Vieilles Vignes from Christophe Baudry’s Domaine de la Perrière. Obviously not a 2010 wine but one we put in at the end of the tasting to show how the 2010s may evolve. Although a number of 1996s, such as Le Grand Clos and Vieilles Vignes from Château Villeneuve as well as the 1996 Bourgueil served at Vins et Livres, are still on very good form, I hadn’t tasted the 1996 VV Perrière for some time, so wondered how it would show.
The Baudry Vieilles Vignes comes from the gravel vineyards close to the River Vienne. In general the wines from the limestone Coteaux are longer lived. I shouldn’t have been concerned as this 1996 had complex and attractive aromas of evolved fruit and seductively soft, supple fruit texture. I doubt if it will get any better but it is likely to continue in this vein for certainly at least another three or four years.
We opened two bottles of the 1996. There was a slight difference between the two with one being rounder and the other showing a little more acidity. Sometimes bottle variation can be very significant with wines of this age.
List of 2010’s tasted:
Aperitif:
Sauvignon VDP du Val de Loire, Domaine de Bablut
Whites:
Touraine Sauvignon, Clos Roussely, Vincent Roussely
Quincy, Domaine des Ballandors, Jean Tatin and Chantal Wilk
Chenin Blanc, Château de la Roulerie, Philippe Germain
3 Coteaux, Chinon Blanc, Baudry-Dutour
Reds:
Anjou Rouge, Château de la Roulerie, Philippe Germain
Clos de la Bienboire, Château de Villeneuve, Jean-Pierre Chevallier
Saumur Champigny, Domaine des Roches Neuves, Thierry Germain
1996 Vieilles Vignes, Chinon, Domaine de la Perrière

Jim, good to see Roulerie is gaining some attention still. Supply in AB seems to have dried up but there is always Noblaie!