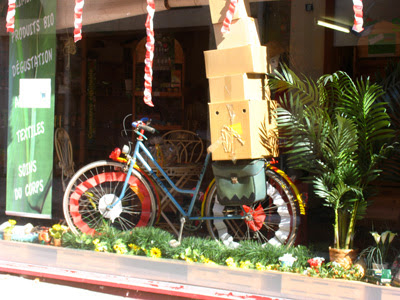 Bike shop in Pauillac in 2010 suitably decorated for the Tour
The winner of this very exciting Tour de France was crowned yesterday at Gap. Cadel Evans rode a superb time trial, especially after all the effort and energy he had expended in the last two Alpine stages. He needed to take 57 seconds out of Andy Schleck over the 42.5km course. That proved to be easy – by the end he had taken 2 min 31 sec. Cadel narrowly missed winning the stage – Tony Martin's brilliant ride was just 7 seconds faster. But it was good to see the honours shared. Good to see Cadel win as he was clearly the strongest rider over the three weeks.
Once again the Schlecks showed that time trialling, along with perhaps descending in the wet, is their weakness. Andy Schleck is credited with riding a good time trial last year as he finished close to Contador. In reality it was Contador who rode well below his best in lat year's Bordeaux to Pauillac stage. This year Contador came in third at 1 min 06 sec down on Tony Martin, while Andy Schleck was 2 min 38 sec down and Frank at 2 min 41 sec.

Despite Andy Schleck's brave attack on Thursday's mountainous stage 60km from the finish, the Schlecks needed to have more time on their rivals going into the time trial. I think they paid for their timidity in the Pyrénées.
Stage 21: Créteil to Paris Champs-Élysées
Today's stage into Paris will be largely ceremonial. As is now traditional the leaders will not attack each other. For them the racing finished yesterday with Cadel Evans as the winner of the 2011 Tour with an advantage of 1 min 34 sec over Andy Schleck and brother Frank at 2 min 30 sec.
The racing will start as the riders approach the Champs-Élysées as there still remains the stage finish and very importantly the winner of the Green Jersey is yet to be decided. Mark Cavendish still leads with 280 points from Jose Joaquin Rojas on 265 and Philippe Gilbert on 230. Mark Cavendish has easily won the sprints on the Champs-Élysées in the last two previous editions and should do so again but there are always things that can go wrong!
Rojas, who is the only other realistic contender, has yet to beat Mark in a full out sprint this Tour. There is an intermediate sprint on the Champs-Élysées with 20 points going to the winner and then for the final sprint there are 45 points for the first over the line. Cav will be super determined to win both the stage taking his stage victories to an amazing 20 in four editions of the Tour and confirm his hold on the Green Jersey. Fingers crossed!
Posted by Jim's Loire at 08:53