Paolo Tessardi awarded €5000 for apparently writing a load of bollocks! 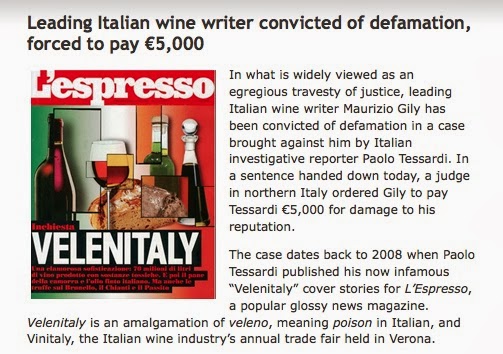 In an apparently bizarre court judgment Italian wine writer, Maurizio Gily has been ordered to pay fellow Italian 'journalist' Paolo Tessardi €5000 for defamation. In 2008 Gily exposed as nonsense some sensationalist reporting on Brunello by Tessardi. It appears that it is agreed that Tessardi's reporting was inaccurate but Gily has been founded guilty of not attacking Tessardi with sufficient respect. Quite why Tessardi deserves respect for inaccurate reporting is not entirely clear. It is surely reasonable to conclude that, rather than Gily damaging Tessardi's reputation, it was surely Tessardi who was responsible for any damage to his reputation through his sensationalist and inaccurate reporting.

'Leading Italian wine writer convicted of defamation, forced to pay €5,000
In what is widely viewed as an egregious travesty of justice, leading Italian wine writer Maurizio Gily has been convicted of defamation in a case brought against him by Italian investigative reporter Paolo Tessardi. In a sentence handed down today, a judge in northern Italy ordered Gily to pay Tessardi €5,000 for damage to his reputation.

The case dates back to 2008 when Paolo Tessardi published his now infamous “Velenitaly” cover stories for L’Espresso, a popular glossy news magazine. Velenitaly is an amalgamation of veleno, meaning poison in Italian, and Vinitaly, the Italian wine industry’s annual trade fair held in Verona.

'When wine writing really gets ugly: the sad truth about the Gily-Tessardi affaire
Italian enonauts continue to reel in the wake of news that beloved Italian wine writer Maurizio Gily has been ordered to pay €5,000 to so-called journalist Paolo Tessardi for damage to the latter’s reputation in a blog post published in 2008.

The bottom line: Tessardi’s reporting of an Italian government investigation into wine adulteration in 2008 was inaccurate and sensationalistic; and Gily’s attempt set the record straight was vindicated by the fact that Tessardi’s claims proved to be untrue.'
http://dobianchi.com/2014/01/15/italy-journalism-law-suit/

Details of the court's decision.

Hopefully this will go to appeal and the judgement overturned.
And, fortunately, 'This Blogger' is always respectful…

Hope so too Brett. As ever there are people who are uncomfortable with the truth.