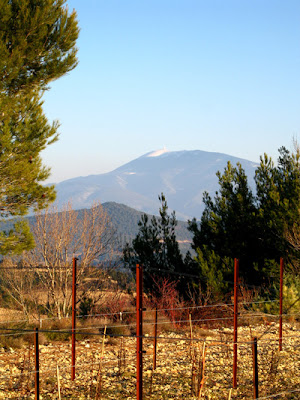 Mont Ventoux from a vineyard in Rasteau

Yesterday proved to be the day when a big break (18 riders) was allowed to stay away to the finish. It took some 40 kms before the peloton gave the break its head but once the lead stretched out, the main group headed by Sky enjoyed a fairly relaxed ride to Lyon.

On the way into Lyon it looked as though Julien Simon might pull off a long solo win for France but he ran out of gas and was caught by the rest of the break with around a kilometre to go. It looked as though Michel Albasini was going to win the sprint when Matteo Trentin, one of Mark Cavendish's lead out men, produced a well timed effort to Kittel Albasini on the line. This takes Omega Pharma Quickstep's stage wins in this year's Tour to four and is Trentin's first stage win – see list of all-time overall stage winners.

The leading GC rider in the break, Andrew Talansky gained over seven minutes to move up to 12th overall - minutes behind Chris Froome. However, I suspect that this gain may prove to be short lived as Talansky may well pay for yesterday's efforts on the Ventoux.

Today's stage from Givors to the top of Mont Ventoux is both the longest stage (242.5K) of this year's tour and one of the most challenging. During the 1980s we camped in a site close to Vaison la Romaine and over several years I cycled up the Ventoux a good half a dozen times. Usually I went up from Malaucène, which is still a tough route up but nothing like as tough as the classic route up from Bédoin. I went up from Bédoin once and it was possibly the toughest climb I have ever done.

At 240 metres Bédoin is over 100 metres lower than Malaucène (365m) – the top of Ventoux is at 1912m, so 1672 metres (5486 feet) of climbing. The road up was not as smooth and well metalled as much of the route up from Malaucène  – as this is a long time ago this may well have changed. You roll through Bédoin and the road gently climbs past vineyards (Côtes du Ventoux) for about a couple of kilometres before you get to a forest, the road turns left and the real climb starts with the road rears straight up. It goes on and on until around six kilometres from the top when you reach Chalet Reynaud and the moonscape begins. Climbing up through the woods you at least have some shade and protection from the wind but from the Chalet onwards there is no protection from the potentially strong winds and the Mediterranean sun and heat. About 1K from the summit the riders will pass the Tommy Simpson memorial that commemorates the British rider who collapsed and died here during the 1967 Tour.

It promises to be a great stage. Will Chris Froome find himself isolated before they get to the base of the Ventoux? Will he prove to be the strongest on the climb? Has Alberto got his climbing legs back? And what of Quintana? Will the two Belkin riders – Bauke Mollema and Laurens ten Dam – continue to impress? Will the stage be won by a GC rider or by a rider from a breakaway. Whatever happens there will certainly be changes to the overall classification tonight.