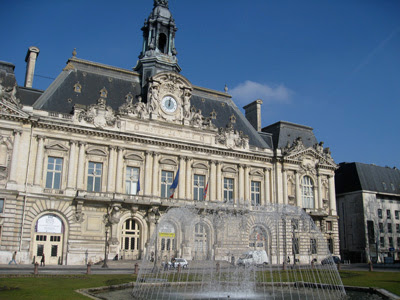 Just when it looked as though Mark Cavendish was about to get his second stage victory of this Tour and his 25th overall he was overtaken on the line by Marcel Kittel, who had followed Mark's wheel when he made his sprint effort. Defeat by Kittel in Tours is likely to be particularly painful for Cav as he had a good lead out by Gert Steegmans.

Later Mark admitted that Kittel had just been faster. Has Cav has been affected by his broncial complaint that he had before the Tour started or are we seeing a change of guard with Kittel as the new fastest man on two wheels?  Cav didn't appear to put in his second acceleration that he often uses. Peter Sagan was third further strengthening his grip on the Green Jersey. Cav is now second but nearly 100 points behind Sagan. Marcel Kittel moves up to three stage wins overall – see here.

Today's stage to Saint Amand Montrond (173K) is likely to end in a sprint, so it will be fascinating to see if Cav can win there or whether Kittel will again or whether Griepel will take another win. Griepel missed the sprint as he was caught up in the big crash just over 2K from the finish. Apart from the final stage into Paris today will be the race's last flat stage – there is just one 4th category climb – in this year's race.

Unfortunately Edvald Boasson Hagen is out of the Tour with a broken shoulder blade sustained in that crash. This takes the Sky team down to seven riders, which makes the task of keeping Chris Froome in Yellow more difficult. There was no change to the overall standings and unless there is a crash close to the finish but before the 3K mark it will be very surprising if there is any change tonight. The Ventoux, however, is getting closer....