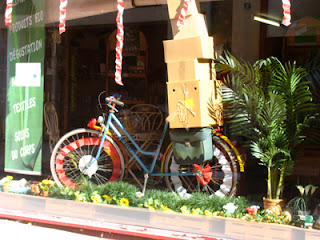 Tour de France stages to Gap usually seem to throw up drama and yesterday was no exception. The real action was sparked on the final climb with attacks by Valverde, Kreuziger and Contador. Froome with the assistance of Porte managed to hold off these attacks. Contador crashed on the descent into Gap, which held up Froome who was following him down. Fortunately Mollema, Quintana and others in their group waited for them. However, Laurens ten Dam lost a minute and has slipped down a place in the overall classification with Quintana overtaking him moving up to 5th overall.

The stage was won by Rui Faria da Costa – his second stage win in the Tour de France.

In 2011 Cadel Evans attacked Andy Schleck on the same climb and took more than a minute out him, while in 2003 Joseba Beloki crashed badly on the descent into Gap. The crash essentially ended Beloki's career.

Today is the 33 kilometre mountain time trial with two 2nd Cat climbs included. Chris Froome must be favourite for the stage and once again will be expected to gain further time on his rivals. It will be interesting to see what the changes to the order of the top 10 riders by the end of the TT.