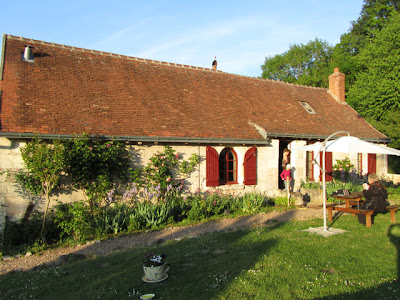 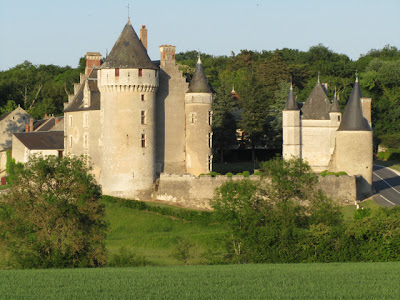 
Had an excellent meal last night at the Auberge de Montpoupon. Since 1st April the Auberge has a new chef – Marc Hammani. Having cooked around the world, Hammani has taken the Auberge upmarket. His arrival is decidedly good news as the cooking has been patchy at the Auberge over the years as different chefs have come and gone.


Hammani was at the Château de Vallagon in Bourré last year. Vallagon is owned by four Dutch businessmen, who bought it in 2005 restored the château turned it into a hotel. Hammani was about to head off to Qatar but decided instead to settle in Touraine, particularly as he has an 11 month old baby girl called Sophie. 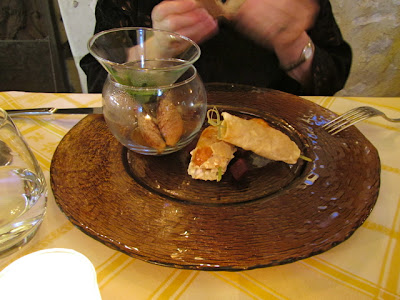 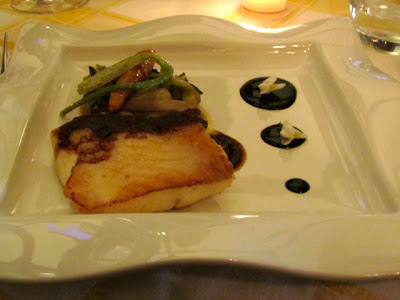 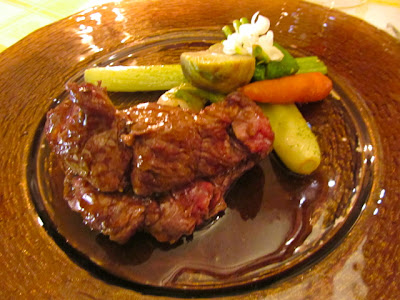 
We had the 39€ menu, which gives you a choice of entrée, main course and dessert from the à la carte menu. CRM chose the langoustine, the turbot and the trio of chocolate mousse, while I went for the very delicate crab with avocado, a perfectly cooked filet steak with spring vegetables and the nougat glacé with a raspberry coulis. As the evening was gloriously warm we had our aperitifs outside – Camparis and then chose Thierry Germain's very soft and attractive 2009 Saumur Champigny, Domaine des Roches Neuves. 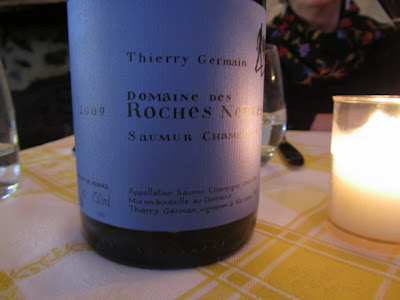 Hammani is very happy with the first month with business up 40% on their estimates. "Most of the time we are full,"  he said. Definitely recommended!

From the Céré la Ronde site:

You would be well advised to forget this address unless you like to pay a lot for bad and few. I had lunch there with three other friends and we ordered a 29 euros menu : tomatoes with goat cheese, “piccata” of veal with vegetables, plate of cheese. None of this plates were correct for several reasons. The entrance had no special taste and it was so small that we thought it was an aperitizer with the bottle of chenin white wine we ordered as a first drink! The veal was hard, dry and not testy at all. Supposed to be cooked with mushrooms, we had to search them with a microscope. Same for the vegetables, a really tiny tiny portion. And we finished with the cheese, dry and old. In addition to that, as we tried to explain to the chief and the owner that we really were unhappy, their only answer was to joke at us considering we new nothing about cooking. Ok…. we may new nothing about cooking but we know that we’ll never ever had a meal there.

Sorry to hear that you had a bad meal. I've had two good meals there – the first one before I had met Marc, so as a complete stranger.

Very strange - have eaten at the Auberge twice since it came under the new chef and owner and, both times, had an excellent meal. Have also had many positive reports from friends.

Makes me wonder if 'Anonymous' visited before April 2011??

after our visit to the Loire Valley this year in June, surfing on the internet I bumped in to your Blog and read the post and comments about Auberge Montpoupon. We had a visit to the castle we enjoyed very much, specially the museum of the hunt. After that we had a meal with the family in Auberge Montpoupon and we had more or less the same experience as the gentleman in the other comment. I'm sorry to say but the level of the kitchen is not what it pretend to be: a good French tabel. When we want to give our opinion to the chef, he declared that we had no idea of what the good French kitchen means.
What a arrogance ! A French friend told me that he even declares in the press that he is expecting a Michelin star... well I can inform mister Marc Hammani, I frequented many Michelin star restaurants and he is miles away from it. To bad.
Morten Thornquist
Norway

Anonymous said...
This comment has been removed by a blog administrator.
6 September 2011 at 18:14

Anonymous said...
This comment has been removed by a blog administrator.
6 September 2011 at 18:19

We've had nothing but excellent meals at the Auberge since Marc Hammani took over. Many French friends have been there and loved the food. But I suppose you can't please everyone.