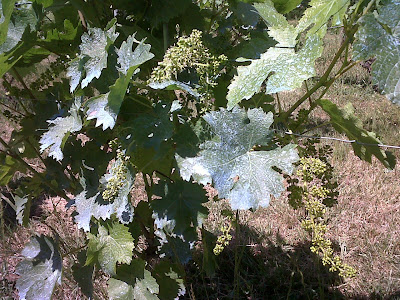 Vines flowering in mid-May – jamais vue ça! (photo: Mark Robertson)
There are now reports of vines flowering in many parts of the Loire with signs of flowers appearing by last weekend and possibly even earlier. This is best part of a month in advance of last year's flowering and days ahead of very early years like 1989 and 2003, when flowering was towards the end of May. You have to go way back to 1893 to find a year when the vines have been so far in advance.
Normally you count 100 days from flowering to picking, so some Loire producers will be picking in August unless there is a very cold spell or the vines shut down due to drought stress. Many producers, who often take a short holiday before the harvest begins, will be having to change their vacation plans!
Posted by Jim's Loire at 08:56

Jim,
Good weather continues here in Eastern Touraine. Since, according to some folk the world will end on October 21st 2011, we will at least get to taste the 2011 vintage in it's almost fermented state before then.

mark. That's a relief then!

Our table grapes are flowering, and have been for nearly a week.