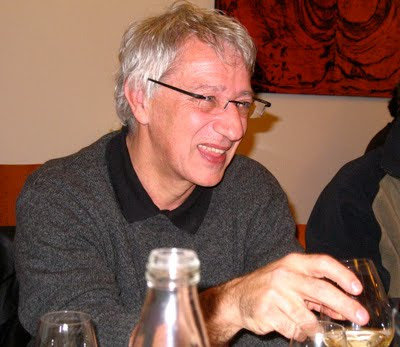 Philip Fournier (February 2009): is he really serious about building FL as an internationally reputed brand?


Today I was invited to a lunch at Rowley Leigh's Café Anglais in London to meet three producers: Philippe Fournier of Domaine FL (a fusion of Domaine Jo Pithon, AC Anjou, and Château de Chamboreau, Savennières), Dominique Meneret (Château de Brondeau and Domaine de Courteillac Bordeaux Supérieur) and the son of the owner of Tenuta la Novella in Chianti.
I have met Philip Fournier once before at a dinner in Angers in early February during the Salon des Vins de Loire. Fournier's stated ambition is 'to make Loire wines of the highest level at FL and to create an internationally reputed brand'. Thus it was more than a little curious to arrive and be told by an exasperated Christine Ontivéro, who until now has done PR for Domaine FL, that neither Fournier or his wines were present. Apparently Fournier had turned up at the railway station only to discover that his passport was out of date. It is not known why FL's wines hadn't arrived but suffice to say that those from Dominique Meneret and Tenuta la Novella had arrived at Café Anglais and were served during the excellent lunch.

The lunch had long been arranged, so it would seem foolish to get together a small group of journalists including influential figures like, Tim Atkin MW, Nick Faith, Rosemary George MW and Margaret Rand and to fail to get there. It is not as though Philip Fournier is some country hick. Instead he is the founder and managing director of the Afone telephone group with a turnover of €50million.

This did make me chuckle, but sounds like you all had a good lunch anyway.

It's always great to discover a new grape. Zuccardi in Mendoza, Argentina grows and makes a single varietal Ancellota, sold as 'Textual' - it's quite a deep, brooding hefty beast.

The lunch was excellent – very nice private room. Glad it mde you chuckle – less sure whether it has made M.Fournier chuckle.

Obviously my reason for going was principally to taste the FL wines again as well as to meet Philip Fournier for a second time.

It is fairly rare that you will get the opportunity to present your wines to a small group of journalists, especially Tim Atkin MW, in convivial surroundings...

we are brothers we are looking for our family tree are from Argentina formosa I leave my email: gracielafunie@hotmail.es