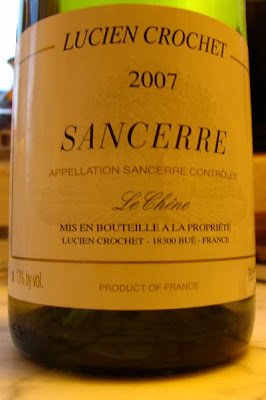 Tonight took a look at the 2007 Le Chêne, Sancerre from Lucien Crochet. This comes from vines grown on caillottes, which are often pure limestone with very little soil if any. Indeed there are parts of Sancerre that are just pure white rock. This has gooseberry and grapefruit flavours typical of quality Sancerre with minerality, a precision and cleanness of flavour that is typical of 2007. The grapes are picked by hand followed by an alcoholic fermentation of around 35 days in stainless steel vats. Bottled in September following the vintage.

Although this is not the top Crochet Sancerre it shows why Gilles Crochet is one of the appellation's top producers.

Then a wine tried last night – 1982 Cuvée Napoléon from the Cave Cooperative de Buzet. Remarkably silky wine with very attractive sweet evolved fruit. Although it lacks great complexity, it has kept remarkably well despite not having the best storage conditions. I suspect that I could pass this off as a classed growth. A blend of Cabernet Franc, Cabernet Sauvignon and Merlot.
Posted by Jim's Loire at 17:39