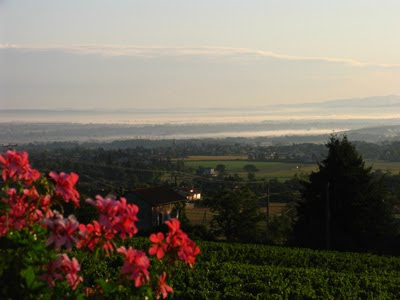 Villemontais: early morning mist hanging over the Loire river
Awoke to early morning mist over the lower parts of the Loire Valley, which soon burned off as the sun got up. Before breakfast I had a quick look at the Fontenay vineyard just below our chambres d'hôtes. These are the highest of Simon Hawkins' vines and they are always the last of his Gamay to be picked. 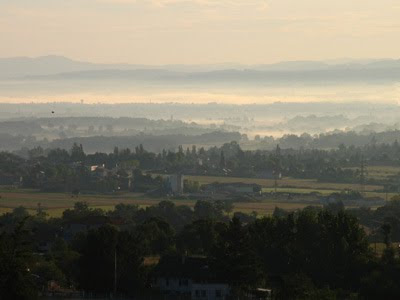 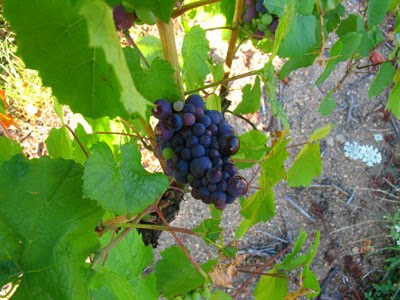 Part of the vineyard by the domaine is in the process of being grubbed up as these were some of the first vines that Simon planted and being inexperienced and knowing no better accepted the advice of the nursery that supplied the vines and planted vines with the wrong rootstock (SO4). 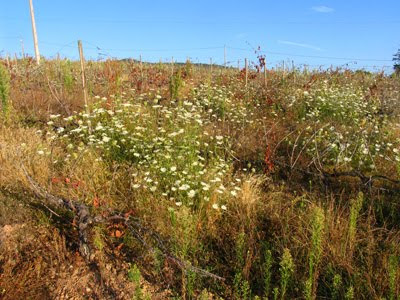 Vineyard being grubbed up
Simon explained: 'No matter what I did the bunches were always large, full of juice and rotted easily. I just couldn't make quality wine out of them. So I'll replant but not with Gamay – I've got enough of that and it's not a fashionable variety, so I need to diversify. I'll probably plant Pinot Gris or possibly Riesling! Most likely it will be Pinot Gris."

We had an excellent breakfast on the balcony of our chambres d'hôtes – local fruit juices, homemade jams, delicious local yogurt etc. Our two rooms – Merlot and Chardonnay – were extremely spacious. Both with a separate sitting room, wc, and walk-in shower. Merlot is ideal for someone with reduced mobility as it on the ground floor, while with Chardonnay the bedroom and shower are upstairs. Good rooms have good views across the valley to Roanne. The Hawkins have four rooms – 68€ for two and 58€ for one with breakfast included. Excellent value, very comfortable and highly recommended.* 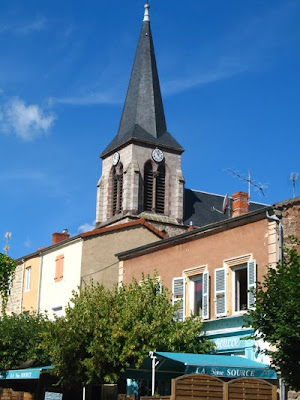 During the morning we did a six or seven kilometre walk up from Saint-Alban-les-Eaux, the next village to the north of Villemontais. A circuit called Les Gorges du Désert, which involves quite a bit a climbing as you start and finish at 425 metres and go up to 638m. It was generally well signposted except at a couple of critical places where the path forked and it wasn't at clear which one you should take. 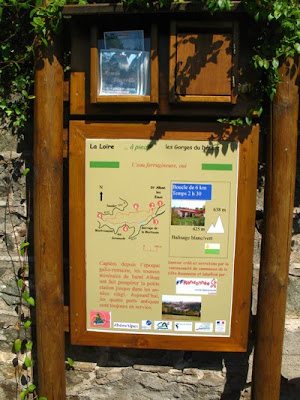 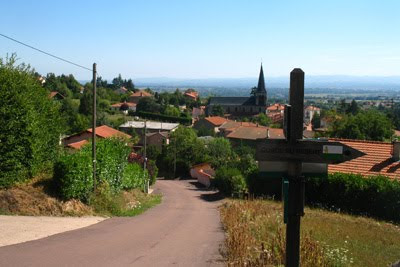 The vines for the Côte Roannaise are largely planted below the strong of villages that run along the base of the hills that rise up to around 1000m on the west side of the valley. As you climb up you move into completely different countryside – less populated, a mix of wood (both pine and deciduous) and fields for raising charolais the famous local cattle. These days there are also a fair proportion of limousin as well. The walk was very enjoyable with plenty of shade for the uphill part through the woods. It took us around two hours. 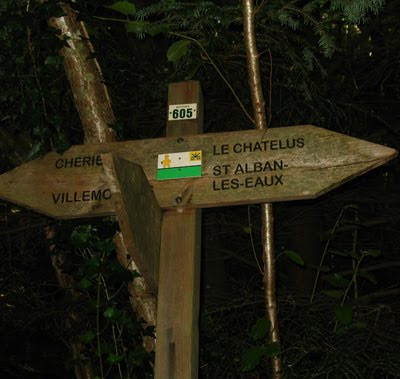 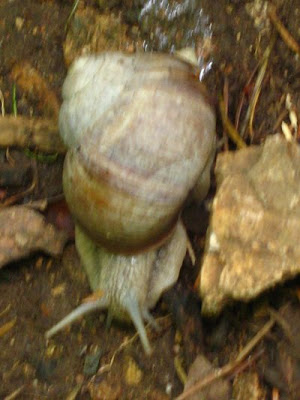 Giant snail – sometimes going up hill we were close to a snail's pace! 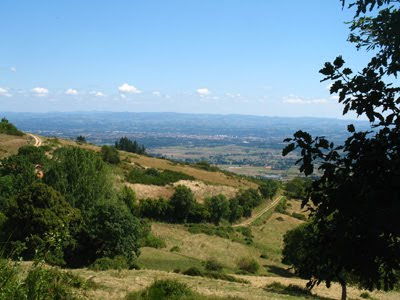 View from the top over Roanne and the Loire Valley
That evening we had a very good meal at La Bonne Accueil in Saint-Hoan – several levels of quality above the Auberge de la Barrage, where we ate the night before.

* We paid in full for all our accommodation and meals on our Upper Loire wandering.