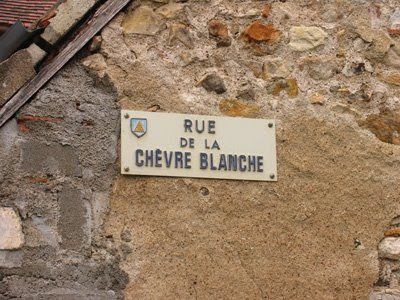 Street name (White Goat Street) in the old part of Sancerre
The photo is a reminder that Sancerre isn't just famous for its wine but also its goats and their cheese. Before the wines of Sancerre took off on the world stage, there would have been a patchwork of cultures rather than the now virtually unbroken vineyards as for most farmers vines were only a part of their activity. They practised polyculture often having a few goats, rabbits as well as growing corn and vegetables. Now there are very few goats in Sancerre or Chavignol as the herds are now kept outside the wine appellation zone.

There is, however, still a very good goats' cheese maker in the centre of Chavignol – Dubois-Boulay. Their Crottin de Chavignol are highly recommended especially with a glass of Sancerre Blanc. Their shop is open every day from 1st March to 11th November.
Posted by Jim's Loire at 11:36