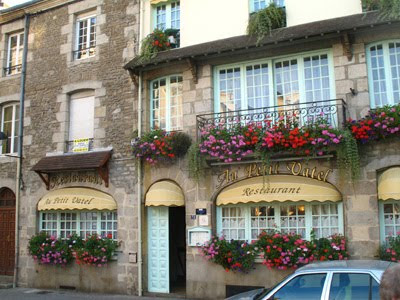 Au Petit Vatel, Alençon
We stayed overnight in Alençon and ate at Au Petit Vatel. We'd eaten once before at Au Petit Vatel but at least 20 years ago. The evening got off to a good start with Jean Pabiot's very attractive 2007 Pouilly-Fumé Domaine des Fines Caillottes with its good weight of fruit and mineral length. It has the typical purity of the 2007 vintage but without the leanness that some Sauvignons of this vintage show. It made an excellent aperitif and worked well with my snails in puff pastry accompanied by scrambled eggs and my filet de bar.

I have often been critical of Pouilly-Fumé but this particular one hit the spot. 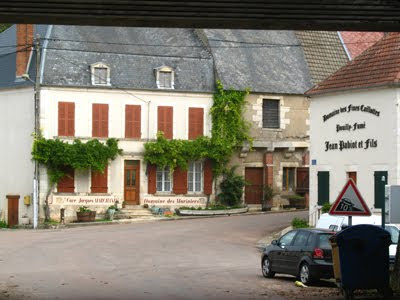 Domaine Fines Caillottes, Jean Pabiot, Les Loges, Pouilly-Fumé
So what of Au Petit Vatel? Some and some has to be the verdict. We chose the 33.90€ menu that has been cut from 38.90 following the reduction in TVA for restaurant meals. My first two courses (mentioned above) were very good as were the homard parcels chosen by the the other two diners. However, the rognons de veau were not of the same standard and I have had considerably better elsewhere, although the mustard sauce was very flavoursome. I chose Camembert beignets as my cheese course. Unfortunately the dressing on the salad that accompanied the beignets was sharp and vinegary and needed more oil.

Our dessert of millefeuille of apple was cleverly conceived and delicious with dried slices of apple acting as the feuilles. Unfortunately the charlotte chosen by our friend was poor and tasteless.

With main course and the cheese we drank a bottle of 2005 Cahors, Clos la Coutale. Still young but with very typically robust Cahors fruit.

Auberge du Mail, Cormery
There is a good recent post on the 'Wishing I was in France' blog on the Auberge du Mail in Cormery. During the 1990s we used to go to this restaurant a lot and always had a good meal. For no good reason we stopped going, so this post was a reminder that we should go back again. Certainly fancy trying the Geline de Touraine (special local chicken) with the chèvre.

Report on the pre-60th dinner in Pauillac now finished here.
Posted by Jim's Loire at 16:12

Jim, Thanks for mentioning my blog and the recent post about the Auberge du Mail. I really appreciate it. Martine