Upper Loire wanderings: day 7 – Côtes d'Auvergne - around the vineyards of Boudes and Charlus 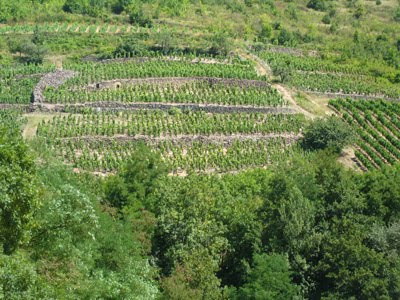 Terracing on the steep hillside@Boudes: echoes of Côte Rôtie!

Although the wines of the Auvergne are now little known, this used to be a very important wine region. In 1895 the Puy-de-Dôme was France’s third department viticole with 44,000 hectares of vines planted*. This was the year that phylloxera arrived in the region, whose reputation had already been undermined as producers had gone for volume rather than quality.

Wine-making in the region goes make to Roman times (details from the site of the Chambre d’Agriculture of the Auvergne) with vines grown up to 1000 metres until the 11th century. However, the climate cooling between the 12th and 16th century meant that vines could no longer be cultivated successfully at this height. The wines used to be transported on barges down the Allier and then by canal to Paris. 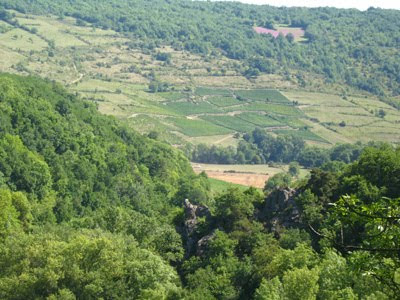 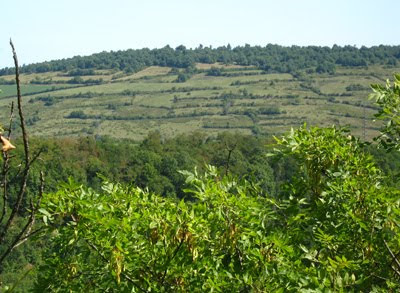 All around Boudes there are vestiges on the steep south –south-west facing hillsides where the vineyards used to be. The pretty village of Chalus a little to the east of Boudes is part of Côtes d'Auvergne-Boudes. The vines here tend to face more south-east and south. Wine village of Chalus (above and below) 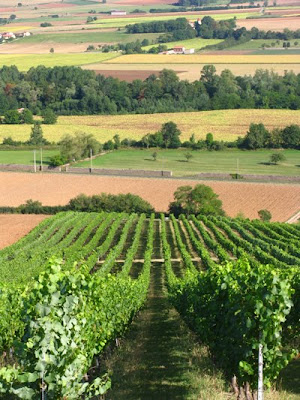 Chalus: looking down the vines onto the flat arable land 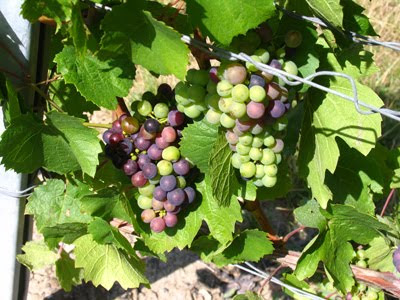 * 30.8.2009: 'In 1895 the Puy-de-Dôme was France’s third department viticole with 44,000 hectares of vines planted.' Although this claim appears on the website of the Chambre d’Agriculture of the Auvergne. I'm not sure that it is correct having looked at the tables of production and area under vine in Marcel Lachiver's seminal work: Vins, vignes et vignerons (Fayard 1988). Given the semi-mountainous topography of Le Puy-de-Dôme, it would be surprising even in 1895, unless it was an anomaly due to phylloxera, that there were more vines here than in places like the Midi and Bordeaux. Please see posting on 30th August 2009.