Michel Redde et Fils have 40 hectares of vines in Pouilly, mainly planted with Sauvignon Blanc but with a small amount of Chasselas to make Pouilly-sur-Loire. They are one of the appellation's leading producers. Thierry Redde is the sixth generation to run the family estate. It was Michel, Thierry's father who expanded the vineyards and built up the business. Like the majority of the farmers at the time his parents had been polyculturalists raising cows and goats as well as having some vines. Michel built the chai and tasting room 'La Moynerie' at Saint-Andelain that used to stand beside the Route National 7 until it was superceded by the Autoroute A77. Thierry has now been joined by Sébastien, one of his sons. 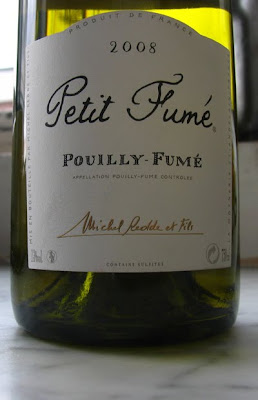 2008 Petit Fumé 2008, Pouilly-Fumé, Michel Redde et Fils
Recommended retail price: £15.99
Available from: Handford Wines (London), Whole Foods Market (London), The Vineyard (Lancashire), Philip Pruden Wines (Leicestershire), Frank E Stainton (Cumbria).
Youthful tinge of green, lemony and lean, clean and mineral. Touch grassy and with some grapefruit but with quite sharp acidity. Bottled early this cuvée comes from the estate's youngest vines. 'Petit Fumé' is a fair description of this light and fresh wine. The problem is that the price (£15.99 recommended) is not 'petit'. 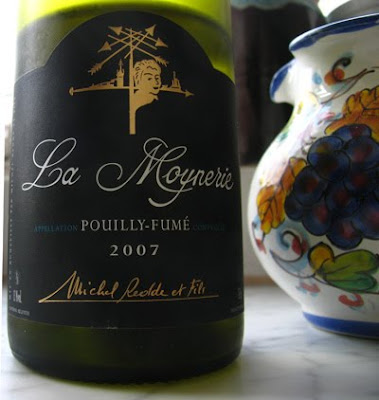 2007 La Moynerie, Pouilly-Fumé, Michel Redde et Fils
Recommended retail price: £17.99
Available from: Hailsham Cellars (E. Sussex), William Mason Fine Wines (Norfolk).
This has more concentration, character and riper fruit both on the nose and the palate than the 2008 Petit-Fumé, while having the typical steely precision of the 2007 vintage. It may take on more weight with further time in bottle. La Moynerie is worth the additional £2 on the Petit-Fumé. However, it is poor value when compared to Jean Pabiot's 2007 Pouilly-Fumé Domaine de Fines Caillottes, which we drank on Monday night. It is available from Telegraph Wines for £12.92 per bottle in a case of six. Curiously the bottle price is only £10.92. 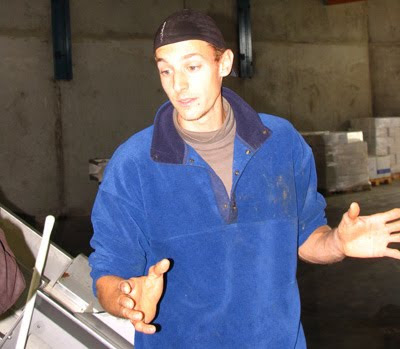 Sébastien Redde during the 2008 harvest