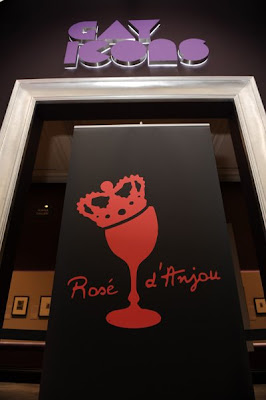 Rosé d'Anjou is sponsoring the exhibition through InterLoire. Extract from their press release:

'InterLoire, the regional trade body for Loire Valley Wines, launched last night its sponsorship of the upcoming Gay Icons exhibition at the National Portrait Gallery in London from the 2 July until 18 October with an intimate evening for their key wine trade VIPs – the first members of the public to see the exhibition.
The ground-breaking exhibition, which will be held from July to October, celebrates the unique, lasting and diverse contribution of gay people to British history and culture. A panel of ten selectors, chaired by Sandi Toksvig, worked to choose six “icons” who may or may not be gay themselves. These icons include Quentin Crisp, Diana Princess of Wales, KD Lang, Pyotr Tchaikovsky and Nelson Mandela. 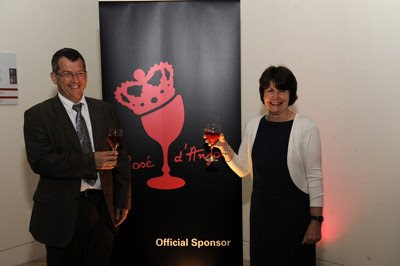 Bernard Jacob and Pim Baxter, Director of Communications and Development & Deputy Director, National Portrait Gallery
Bernard Jacob, Directeur General of Ackerman – Remy Pannier, host of the evening and representative of Rosé d’Anjou commented: “Rosé d’Anjou wines are very proud to be the official sponsor of the Gay Icons exhibition at the National Portrait Gallery for the next four months. Rosé wines are the trendy wines for early adopter consumers in the UK. We want to demonstrate that Rosé d’Anjou has the class and quality to appeal to this broad audience via an association with an innovative, edgy and sophisticated partner. The National Portrait Gallery and the Gay Icons exhibition are the perfect choice.”

Visitors are given a glass of Rosé d'Anjou at the end of their visit.

More about the exhibition: