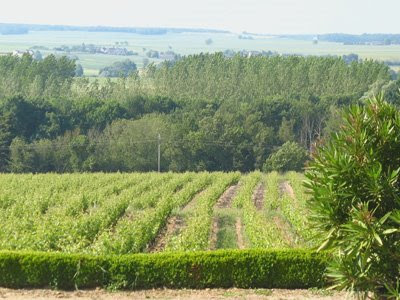 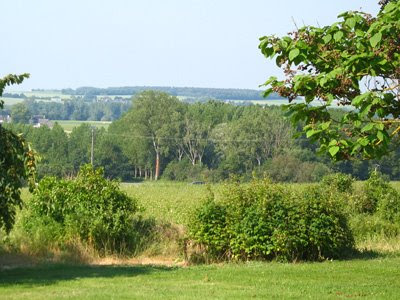 The Domaine Grosbois has nine hectares of vines and is on the coteaux up from the road that runs between Panzoult and Cravant-les-Coteaux. There are records showing that the Grosbois family has been here since the French Revolution. They may have lived here before then but any records that existed have been lost. Nicolas took over the domaine in 2005 having worked at wineries around the world – the south of France, New Zealand (Pegasus Bay near Christchurch), Oregon and Australia (Brokenwood). His first full vintage back home was 2006. 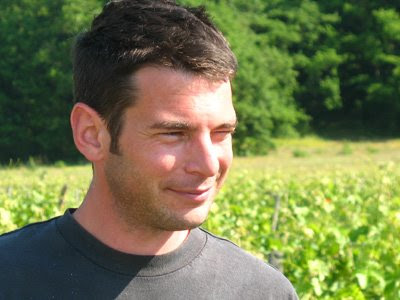 Nicolas Grosbois
Apparently Nicolas’s father had sold a substantial proportion of the production in cubitainer, although some was bottled. This old website lists a Cuvée Printemps and a Vieilles Vignes (www.chinon.com/vignoble/grosbois). When Nicolas took over he decided that he would be bottling the wines according the different parcels of vines and by terroir. Nicolas has moved away from chemical treatments and, in 2008, he asked for organic certification, so he is currently in conversion. “It’s important to look and listen – organic viticulture is about prevention,” explained Nicolas. “You need to be in the vineyard not following a specified spraying programme and going away on holiday.” 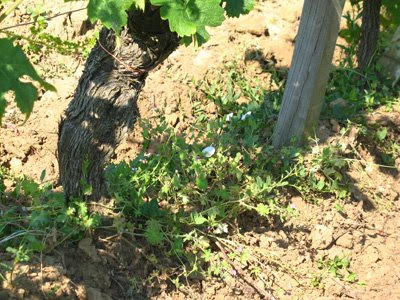 Flowers under the vines
The nine hectares are Cabernet Franc. "The soil here is not right for Chenin Blanc," Nicolas explained. "You need to be on pure tuffeau." Yesterday a few of the vines were starting to flower, particularly those of the edge of the vineyard. Unlike fruit trees or flowering shrubs, vines flowers are in no way spectacular – indeed they are very discreet: just little white stamens. 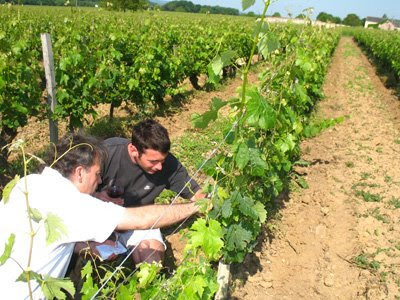 Henri Chapon and Nicolas assessing at the vines 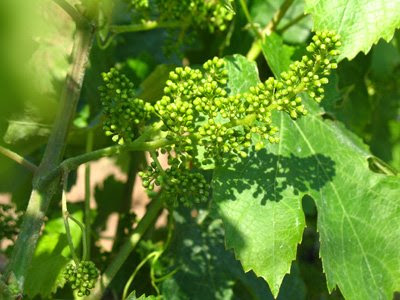 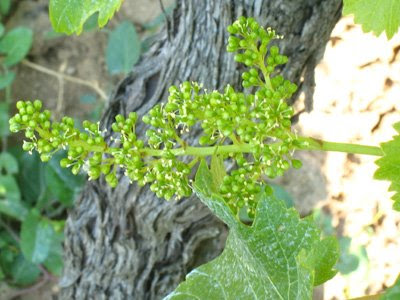 We started our tasting with the soft, charming, easy drinking 2007 Clos du Noyer. This parcel is at the top of the coteaux just below the trees. Some of the vines here are 40 years old, while the rest are 20. The more concentrated and structured 2006 Clos du Noyer with its pruney fruit demonstrates the difference between the 2007 and 2006 vintages.

Then we had a change of terroir with the 2006 Boeuf alais, which comes from the gravel terrace of the Vienne but from the highest part of the plain. It’s here that you’ll find the hamlets as people wanted to build above the areas liable to flooding. The 2006 has attractive sooty aromas, ripe black fruits and liquorice and some structure and tannin with just a touch of greenness in the finish.

None of these wines sees any wood. “I want to see what my different terroirs give – to understand their character without them being masked by a barrel’s influence. I am, however, doing some small experiments with barrels. For instance, some of the 2007 Boeuf alais spent 18 months in two-year-old barrique.” Although the use of wood was well judged on this 2007 trial it had lost its Chinon character. 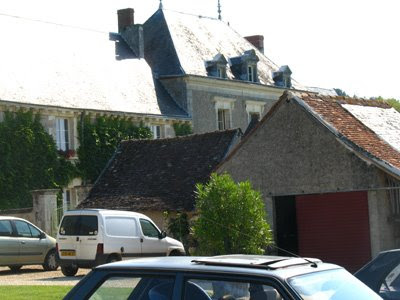 Domaine Grosbois (unfortunately the sun in an awkward position!)
We then tried various 2008s that have good vibrant fruit and look promising. The tasting finished with the 2006 Gabare and 2006 Vieilles Vignes. The Vieilles Vignes comes from a parcel adjacent to the winery just below le Clos du Noyer, while the Gabare is at the base of the coteaux on sand and clay. Neither were really convincing: the Gabare having rough tannins although a second bottle was better, while the Vieilles Vignes had the pencil shavings character of old style Loire Cabernet Franc from fruit picked before it was fully ripe.

However, the 2007s and, particularly, the 2008s shows that Nicolas is getting to grips with his terroir and he is a young vigneron to watch.

Nicolas is so right – it is that attention to detail that makes the difference between organic and intensive farming. Knowing what to look for and being able to make the right judgement about what to do about what you see is a great skill, and it's reassuring to see such skills being maintained and handed on – even actively sought by Nicolas and his generation.

Interestingly these three producers are all in conversion to organic viticulture and that wasn't a criteria when we chose who to visit.