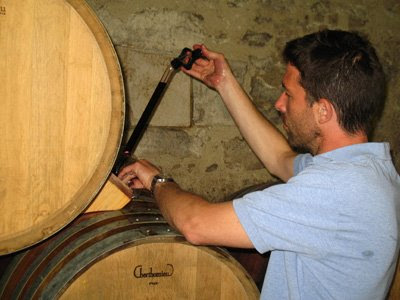 François-Xavier Barc
Some of my most memorable Loire reds have been from Charles Joguet – Dioterie 1988 and 1989 in particular. At the beginning of the 1990s Charles Joguet was widely hailed as the best producer in Chinon. In 1997 Charles, who had founded the estate 40 years before in 1957, bowed out selling the vineyards and the right to use his name. The domaine is based in the small village of Sazilly on the south bank of the Vienne 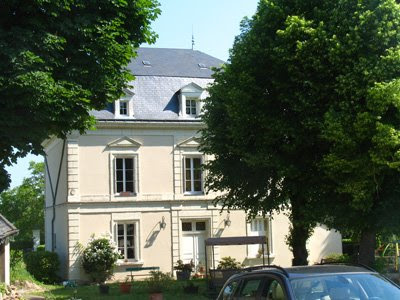 Charles Joguet's family house at Sazilly
There was a marked dip in the quality of the Charles Joguet wines at the beginning of this century. Tasting the range on several occasions the wines were disappointing and lacking concentration. I particularly recall a tasting at the Decanter Fine Wine Encounter in London in either 2001 or 2002 (I must check back through past notes) when I was decidedly underwhelmed.

This dip may have been related to Charles’ retirement. It is also quite likely to be have been related to the departure of François-Xavier Barc, who had been assistant wine-maker from 1998 to 2000. Equally the return to form came with the return of F-X B to the domaine in 2003 in charge of winemaking. Indeed during our visit on Tuesday (2nd June) F-X hinted as much. He said that when he returned in 2003 there were things that needed to be tightened up such as the management of the barrels etc. The barrels are now bought second-hand from Alphonse Mellot in Sancerre. Had yields also been allowed to creep up I wonder? 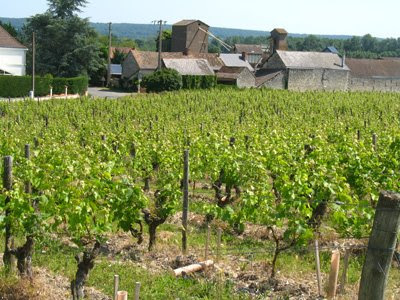 La Dioterie
We started our visit at La Dioterie, which is beside the winery. La Dioterie is split into two the upper and lower portion. There are slight differences in maturity between the two parcels and they might be bottled separately but it makes more sense to blend the two parts together rather than create another cuvée. Les Varennes du Grand Clos is just to the east of La Dioterie. At the moment there is a strip of bare earth between the two vineyards. This is where Les Varennes Les Francs Pieds – the ungrafted Cabernet Franc – used to be. Unfortunately they were consumed by phylloxera and had to be ripped out last year. 2007 was the last vintage made. 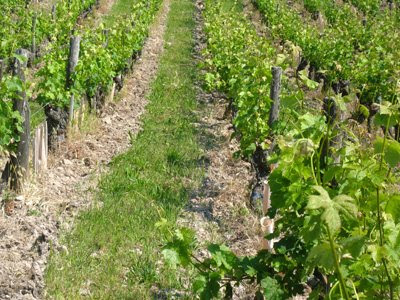 La Dioterie: the estate is in conversion to organic viticulture
We kicked off the tasting with the vibrant 2008 Rosé, which is a rosé de saignée from vines on sand and clay. Then we looked at a series of 2007s starting with the well-made but quite lean Cuvée Terroir (7.50€ - from the domaine) followed by the more weighty Cuvée les Petits Roches (8.50€). Cuvée Terroir largely comes from vines at Beaumont-en-Véron on the other side of the Vienne, while Petits Roches are from 6/7 hectares of vines on gravel to the north of and below Ligre. The 2007 Cuvée de la Cure (10€) was the first of my hits with its soft fruit and hints of spice – certainly worth paying the extra money. This wine undergoes its malo in barrel and is aged for 12 months in 6/7 year-old barrels and comes from a parcel vines of clay over gravel at Sazilly just in front of the village church.

The Chêne Vert is the famous two hectare steep sloping, south-facing vineyard in Chinon itself at the Haute Olive. The 2007 (18€) has promising sweet fruit but is quite toasty at the moment and really needs another year or two. It is aged in barriques of one to three wines. The concentrated and structured 2007 Dioterie (19€) will be bottled in August.

Next we tasted a number of 2008s from barrel including a powerful Clos de la Cure and a structured, smoky, black cherry Dioterie. At this stage the 2008s look promising but we’ll have to see how they are once they are in bottle.

We finished by tasting the Joguet whites, which come from Chenin planted in a 3 hectare vineyard at the boat building village of Saint-Germain-sur-Vienne outside the Chinon appellation so are AC Touraine. The 2007 Clos de la Plante Martin (12€) is absolutely delicious with apricot and touches of dry honey, good weight and lovely precision. Underlines what a good vintage 2007 can be for Loire whites. The 2008 is still in barrel (400 litre) and has weight and mineral precision – should be good. 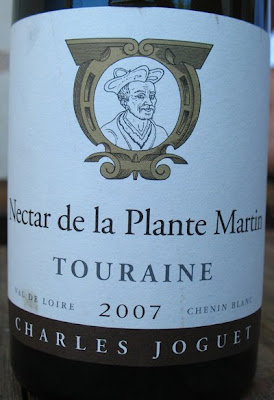 Finally a curiosity – 2007 Nectar de la Plante Martin – a sweet wine with 9% alcohol, 7 gms acidity and 150 grams of residual sugar. Certainly rich – fine sucrosity on the palate – with a lot of citrus fruit with a long fresh finish. Would make a great aperitif.

F-X B and his team are making some good things here particularly at the top end. Top picks for me were the 2007 Clos de la Cure and the Clos de la Plante Martin.

Very fine post, and I am extremely intrigued and very much looking forward to the continuation of your piece on Joguet. They're one of my favorite producers. I have to ask, do you have an understanding of their bottling protocols? I've experienced significant variation amongst bottles of the same cuvee, between cases and even, sometimes, within the same case. Great wines, a great post, and, once again, a great blog.

Thanks and regards for your efforts.

Many thanks jb. I'm afraid I don't have an understanding of their bottling protocols.Could the variations be down to cork?