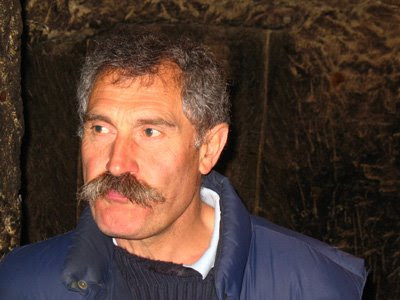 Nady Foucault
I first met and tasted with the Frères Foucault – Charly and Nady – back in early February 1990 just after my first visit to the Salon des Vins de Loire. In those days the Foucaults were rather seen as marginal producers with their systematic use of barriques. The late 1980s and early 1990s were, of course, the time when Saumur-Champigny was fashionable in the bistros, yields were often higher and many producers less ambitious than they are now.

This is not to say that there weren’t some good Saumur-Champignys made then, with some that have stood the test of time – the 1990 Les Châtains, Domaine de Nerleux, 1990 Terres Chaudes, Domaine des Roches Neuves, then owned by Denis Duveau or 1989 Les Folies from Domaine de Val-Brun.

Now the Foucaults are the stars of the region having inspired a generation of younger producers like Jean-Pierre Chevallier (Château de Villeneuve) and Thierry Germain, who bought Domaine des Roches Neuves from Denis Duveau in 1991. Their long-term dedication both to quality and to the methods that their parents used are now recognised. The Foucaults and their wines are hard to find. They have only ten hectares of vines and demand easily outstrips supply. The cellars of the Clos Rougeard and the house where Nady lives with his wife, Anne, are in the village of Chacé, to the south east of Saumur between Varrains and Saint-Cyr-en-Bourg. There is no sign on the entrance to indicate what’s inside.

Henri and I go inside – Nady is busy working in his garden. We head down through the small door into the quite extensive cellars that lie below with some 500 barriques. We start with a look at the 2008 Saumur-Champignys in barrel. All the reds spend two years maturing and then a further year in bottle before being sold. The Foucaults, like a number of other Loire producers, look towards Burgundy for kinship rather than Bordeaux. 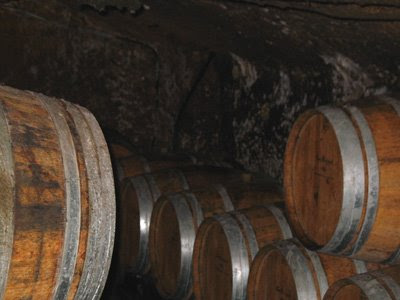 Some of the 500 barriques
There are three reds, which Nady equates to the Burgundian cru system, Clos Rougeard (village level), Les Poyeux (Premier Cru – aged in one year old barriques) and Le Bourg (Grand Cru – aged in new barrels for up to 30 months). The Foucaults’ ten hectares include just over a hectare of Chenin Blanc at Brézé, where Chenin grows particularly well. The rest is Cabernet Franc broken down into 4.5 for the domaine, three for Les Poyeux on silico-calcaire and a single hectare for Le Bourg.

It hardly needs saying that there are no weed killers or insecticides used in the vineyards, that the yeasts are natural and that there is no chaptalisation here.

We try various barrels of the 2008s, which are looking promising with rich, bright, attractive fruit. We move to the tasting area where there are a number of coins pushed into the soft cellar wall. The custom is for first time visitors to the cave to place a small denomination into the wall for luck. Some of the coins go back years to the time of Charly and Nady’s parents. 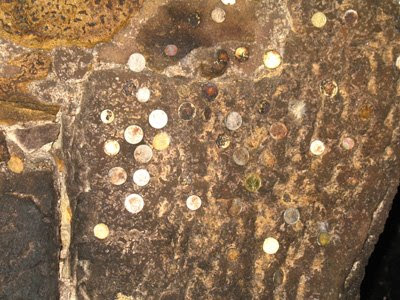 Coins on the cellar wall 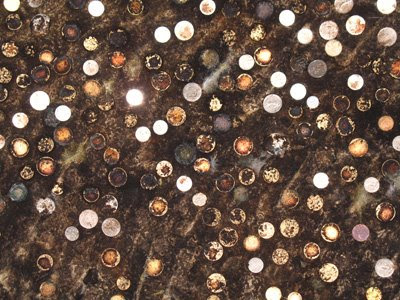 Henri mentions that he has tasted the Foucaults wines before but it is clear that he is including Antoine Foucault’s wines in this. Nady is careful to point out that they are not the same wines. There is unfortunately some tension within the family over Antoine’s decision to go it alone with his own operation – Domaine du Collier. This is a shame as both Antoine and the two brothers are making excellent wines. 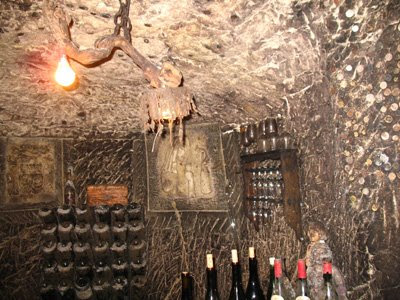 The tasting area of the Clos Rougeard cave
We start with the 2005 Clos Rougeard – aged for two years in once or twice-used barrels, followed by the customary year in bottle. It has weight with just a hint of animal, though truffle is more pronounced, with good length but a touch dry in the finish. Time will probably smooth that out, while drinking this with food certainly will. The 2005 Les Poyeux is a step up with greater concentration of black fruits, structure with mature tannins and length. The fruit aromas persist in the empty glass. 2005 Le Bourg, which spent 30 months in barrel, tops Les Poyeaux with its rich truffly nose, concentration with touches of sweetness, complexity and lovely texture. There is a lot of potential here – one to cellar for several years. Le Bourg yields 25 hl/ha in 2005, so there are only 2500 bottles available. 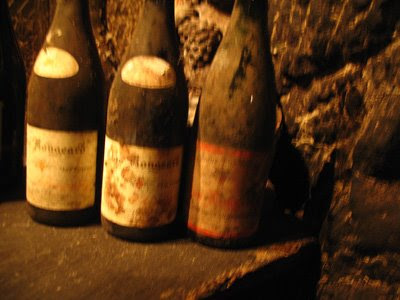 We have been joined by Charles, who I first met many years before when he was working for the Vignerons de Saint Cyr, the very well run local co-operative. For some reason I visited the co-op with Charly and Nady. At one point we paused to look at a stainless steel mixer. When I asked what it was for, they explained that it was used to mix the sugar and juice together for chaptalisation. “C’est la machine qui fait le soleil” (It is the machine that makes the sunshine), I said as a throw away remark. Much to my astonishment both brothers have always remembered the remark.

Charles is now a consultant and his clients include Château Soucherie, Beaulieu-sur-Layon, which changed hands at the beginning of 2008. Charles suggests I should visit sometime to see what the new regime is doing. The Château Soucherie (www.soucherie.com) website looks pretty but prefers sonorous clichés to solid information. Still this is a fairly common failing of French wine websites. But I digress ...

Next was the delicately animal but harmonious 2004 Les Poyeux, again with attractive texture but with tight tannins reflecting the vintage. Drink this before the 2005s. Then the last red – 2002 Le Bourg – a less concentrated wine but with lovely spice, balance and length. Barriques for the whites
The 2008 Saumur Brézé Clos Rougeard – citric, clean and very precise – is still in new barrels. So on to impressive 2005 Brézé – 13.8% with 2 grams of sugar remaining. Light gold, weight and concentration but it lacks the freshness and vivacity of the 2008. Nady suggests that this makes a good aperitif or to accompany langoustine or white meats. 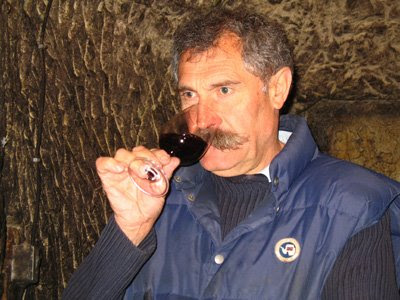 The truffley and textured 2001 Brézé follows – showing some evolution. The very fine 2000 Brézé is a particular favourite of Nady’s. You can see why – it’s younger with lovely texture and precision. Can be enjoyed now but still has a long life ahead of it.

We concluded the tasting with a Sauvignon Blanc! Nady’s wife Anne is the daughter of Edmond Vatan, the legendary and now retired Sancerre producer. Anne has now taken over the one-hectare Clos la Néare in Chavignol. The gooseberry and mineral 2008 was bottled just a couple of weeks ago, although showing well it needs time to recover from the bottling and will probably taken on more weight with further time in bottle.

Clos Rougeard remains one of the Loire’s very top estates.
Posted by Jim's Loire at 18:54

But while we patiently wait, I wish to report consuming a really, really excellent bottle of the 2003 Les Poyeux about one month ago.

Sorry Jack to test your patience. Plan to finish this report today.

Their (presumably awesome) 2005s have just been released through Artisan Wines in the UK. £35 for a bottle of Le Bourg looks cheap compared to Grand Cru Burgundy.

Another 1990 Saumur Champigny worth a look is the Cuvee Lisagarthe from Chateau de Hureau. Fully mature and delicous with braised venison shoulder.(Saumur wine shop Aux Saveurs de la Tonnelle had some last year, 28 euros a bottle if I remember correctly)

Colin - many thanks. £35 for 2005 is a very good deal – still needs time in bottle but is certainly cheap compared to Grand Cru Burgundy.

Yes Philippe Vatan at Château de Hureau has long made good things.His 1990 Saumur Blanc at the time was an eye opener.

Colin – am adding to this as I go along.

Checking in from the Aude Jim. Great report, many thanks. - Chris

Thanks Chris. Enjoy your time in Limoux with perhaps time to sneak into the Corbières, too.

"Clos Rougeard remains one of the Loire’s very top estates." To me, they are the top estate. No one else's wines (in the Loire) have given me so much pleasure as Clos Rougeard's.

Colin - That is a crazy great price for the 2005 Le Bourg; it won't be anything like that in the US.

Jack. I have to put estates like Huet in Vouvray at the same level but certainly the Foucaults are in the top handful of Loire producers.

Jim: Unfortunately, I've not had any of the aged Huets that people rave about, so I just can't compare. For Cab Franc, Clos Rougeard sets the standard (to me)...and becoming The Choice when I dine out and there happens to a Clos Rougeard red on the wine list.

For whites, well, that's much more diverse...both in location and grape varietals.

For me it is not just the aged Huets, as well as examples from Foreau, that are remarkable but more recent vintages too. I agree I will often choose a Clos Rougeard, although I think that Jean-Pierre Chevallier (Ch de Villeneuve), for instance, also makes very fine Saumur-Champigny that ages very well.

Hi Jim,
I've set up a Clos Rougeard fan page on Facebook which includes a link to this article. My hope is it can become a locus of all available Clos Rougeard related material. One technical query: Do you know the location of Les Poyeux vineyard? I'd like to include a google map link to it.
All the best,
Colin

Hi Colin. Many thanks for your message. I think Les Poyeux is on the road from Chacé to Champigny after you have crossed the main road driving eastward. The vineyard faces south - south west if I remember correctly.

I bought 02 bottles of 2000 Clos Rougeard Brézé. The harvest that Nady said was his favorite at your post. Have you already proved that this harvest chenin blanc?

What's the best way to request a visit with Nady?

Thanks in advance for any assistance!