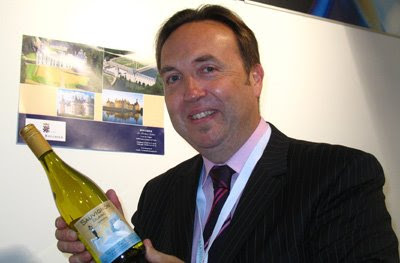 Olivier Mouraud
After I had finished tasting the Minière Bourgueil I moved onto Bourgrier SA, the Loire’s 9th largest wine company and had a chat with Olivier Mouraud, export director for Bourgrier. We talked about Systeme U taking screwcaps – another indication that in parts of the French retail trade screwcaps are becoming increasingly accepted.
Bougrier’s Cave de la Nantaise, their third vendangeoir (winery) came into service last year. Being in forst ravaged Muscadet this 10,000 hl capacity winery was hardly used last year – processing only 1000 hl. Still I guess it gave them the opportunity to test out all the equipment when not under the full pressure of a normal harvest. Hopefully 2009 will see them and everyone else in Muscadet close to full production this year.

While we talked I tasted the attractive grapefruit and mineral 2008 Sauvignon Blanc Famille Bougrier sourced from the family vineyards at La Chaise, Saint-Georges-sur-Cher.

Leaving Olivier it was time to return to some Muscadet – this time Eric Poiron of Maisdon in the Sèvre-et-Maine. Poiron has 40 hectares split between two properties – Domaine des Quatre Routes in Maisdon on schist and Domaine du Manoir in Chapelle Heulin on volcanic rock. I tasted the range from the 2007 and 2008 vintages and, on balance, preferred those from 2008. There was the recently bottled lemony and reasonably weighty Domaine des Quatres Routes. However, I thought the concentrated and quite rich 2008 Château des Grand Noelles was showing best, although the 2008 Le Fief Giraud also merits a mention.

It probably would have made sense to taste the Antoine Simoneau’s Touraine wines (Domaine de la Rabelais) straight after the Bougrier wines as they are almost neighbours in La Chaise, a hamlet of Saint-Georges-sur-Cher – but that is the vagaries of a large wine fair! 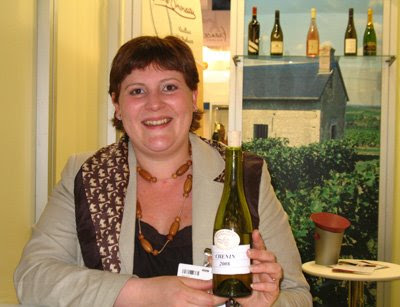 Carine Simoneau with the 2008 Chenin Blanc
Firstly a couple of 2008 Sauvignon Blancs – La Prée Vinette AC Touraine and the Domaine de la Rabelais vdp Val du Loire. Yields in 2008 were only 35 hl/ha. Of the two I preferred the vdp, which cannot be AC Touraine as it has 6.5 gms of residual sugar – above the level permitted for appellation contrôlée Touraine. The vdp has attractive grapefruit flavours and good length, while the AC Touraine has a slightly disappointing mid-palate.

Then a 2008 Chenin fermented in barriques made of acacia wood – the most interesting Simoneau wine I have ever tasted from them. Still a barrel sample it is clean, precise, good weight with hints of apricot and a touch of wood spice in the finish. It comes from vines aged between 15-60 years with yields of 30-35 hl/ha. It will be good to taste this again once it is in bottle.

Onto Domaine de la Haute Clémencerie (www.domaine-haute-clemencerie.com) in the commune of Faverolles, which adjoins Saint-Georges-sur-Cher to the east. Founded in 1932 and now run by Patrick Mahoudeau, Clémencerie has 28 ha hectares of vines. During the Sauvignon Blanc Ambassador tasting, the 2008 Sauvignon Blanc Clémencerie AC Touraine provoked much discussion before making it to Ambassadorial status.

Tasting this in London nearly three months on, it is difficult to see why we agonised so much. Their 2008 Sauvignon Blanc is now attractively crisp, vibrant and with good weight. I was also impressed by their soft and creamy sparkling Touraine, which is made from 50% Chenin and 50% Chardonnay. It spends 18-24 months on its lees at Marcel Huet’s premises in Bourré. Many producers in Touraine, Montlouis and Vouvray entrust the secondary fermentation and aging of their sparkling wine to a specialists like Huet or Berger in Saint-Martin-le-Beau.

Philippe Raimbault from Sury-en-Vaux has 16 hectares of vines – around 10 in Sancerre, four in Pouilly-Fumé and 1.5 in the Coteaux-du-Giennois. (In case you ask France’s Pages Blanches lists 24 Raimbaults in Sury-en-Vaux. Not as many as the 28 Crochets in Bué but impressive nonetheless. The ‘basic’ Sancerre comes from 30 different parcels and is called Apud Sariacum – the name for Sury-en-Vaux until 12th century. I tasted the 2008 and 2007 as well as the minerally and citric 2008 Les Godons, which was my preferred wine of the three. I was impressed by his 2008 Mosaique Pouilly-Fumé with weight, gooseberry flavours and balance. We ended the tasting with Raimbault’s red quite austere 2007 Coteaux du Giennois – a blend of 80% Pinot Noir and 20% Gamay.

Philippe explained that when Coteaux du Giennois was promoted from VDQS to appellation status he was given additional planting rights to allow his to plant Gamay. He had previously made 100% Pinot Noir but the AC rules insist that the reds now have to be a blend of the two grapes. We agreed that these rules were pretty idiotic.
Posted by Jim's Loire at 10:08