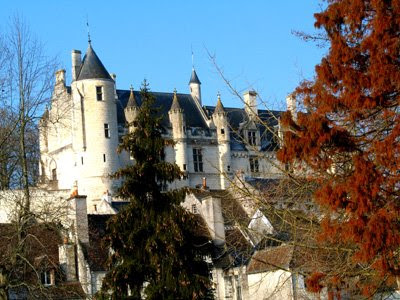 Verneuil Dairy
Interesting article in this week’s edition of La Renaissance Lochoise (10th-16th June) on the 100 years of the Verneuil Dairy, a co-operative with 320 members. The dairy produces around 80,000 hls of milk a year – 152 farms supplying cows’ milk and 52 goats’ milk. Founded in 1909 Verneuil was the last co-operative dairy in the region to be set up, a year after one was established in Orbigny, now closed.
It was apparently the devastation caused by phylloxera in the late 19th century that caused the farmers to switch from vines to milk.

Two bits of good news: sterling is recovering against the euro – today it's up at 1.175. A year ago that would have seemed awful but after 1.02€ at the end of December 2008 you now have a different perspective.


Meteo France's forecast for next week has miraculously improved since last night. Now only Monday is forecast to be wet with sunshine for the rest of the week – good for the flowering but still plenty of time to change for the worse!
Posted by Jim's Loire at 06:18