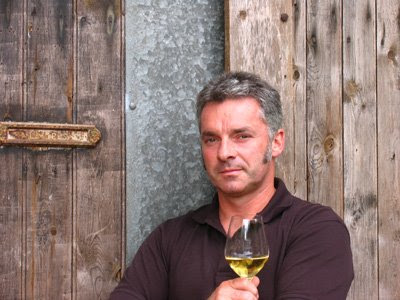 Stéphane outside the entrance to the cave
We left La Cave Insolite to drive to Stéphane’s cave. Finding 12 bis Route de Saint-Aignan looked easy enough as this is the road from Montlouis to Saint-Martin-Le-Beau. Unfortunately few of the properties along the road are numbered and reaching number 36 it was clear we had overshot. The only vignernon’s property we had passed was that of Christian Martin at No 28, who would later feature in Stéphane’s tale. 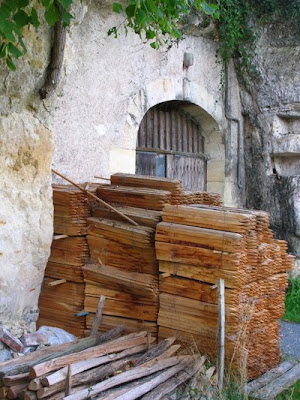 The entrance to 12 bis
Anyway we found a small, short track leading up to the base of the river cliff. No number, no names but a wine press on a concrete plinth and a locked entrance to a cave set into the coteaux with a pile of wooden beside it and next to the Moulin Rouge, which I fondly but wrongly imagined was some wild and nefarious night club. Disappointingly it turns out that it is just a restaurant. A quick mobile call and Stéphane soon arrived – it turned out that he had cut short his holiday and come over specially from Saumur to see us. 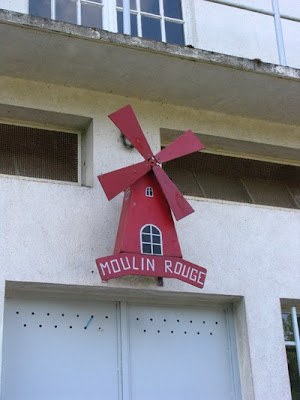 The 'exotic' Moulin Rouge
Before tasting Stéphane told us how he came to be a vigneron and of his series of misfortunes.

Stéphane is unlikely to find his fortune making wine as a small scale Montlouis producer. He could, however, make a very comfortable living from advising people to avoid his example and give up the dream of becoming a small, boutique producer making exquisite wine. I can see the pitch now: “Look at all the problems and misfortunes that I have suffered and turn your back on viticulture.”

“My background is classical music,” Stéphane explained. “I spent four years in Lille but my passion for wine proved to be stronger than my devotion to music. I knew Saumur-Champigny as my mother has a business in Saumur. I enrolled for a year’s course at the Lycée Viticole de Montreuil-Bellay and I really wanted to make Saumur-Champigny. I spent three stages (periods of work experience) with the Frères Foucault.

“I became captivated by Chenin Blanc and starting to look for vines in four Loire appellations: Savennières, Saumur, Vouvray and Montlouis. In 2001 I managed to rent 2.4 ha of Chenin here in Montlouis. I have three hectares now. When I started in 2001 I had less than a Euro in my pocket but I wasn’t prepared to make concessions. 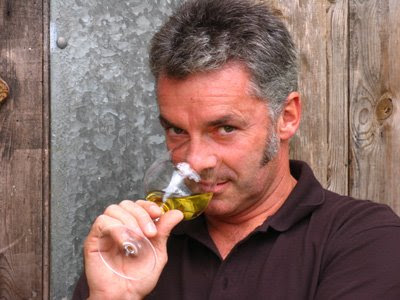 "The first year my wine was very bad because I started off with equipment from an old vigneron. Unfortunately the barriques were dirty, so I had to change them in 2002 and sell my wine at a greatly reduced price. A frost on 11th April 2003 was the next disaster – that year I only made 9 hl/ha. Then my bank said ‘bye-bye’ – they weren’t prepared to fund my overdraft any more. So, if I was to continue, I had to find €23,000 by 31st July 2003. I started a subscription and we managed to raise €210,000. With the heat wave in 2003 we began picking on 15th September but the Chenin was already 15˚ and I wanted to make dry wine!

“More disasters in 2004! I was hit by hail and the owner, Christian Martin, of the vineyards I was renting tried to get rid of me.” Martin apparently disapproved of Stephane cultivating the vineyards organically and going for low yields – pruning so that he has six buds – the practice of the Foucault brothers – instead of the more traditional eight.

There appears to be quite a tradition for vineyard owners, especially those perhaps inclined to look for high yields and with a belief in the efficacy of a chemical regime, to attempt to get rid of the young producers renting their vineyards who have different ideas and different approaches to viticulture. Nicolas Renard, who made some remarkable wines in Jasnières during the 1990s, was eventually forced to give up following a long dispute with the owner of his vineyards. Also the valley of Le Loir Eric Nicolas of Domaine de Bellivière apparently had problems initially with vines he was renting that were solved when he was able to buy his own vineyards. 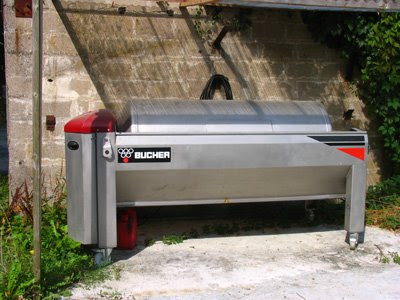 The pneumatic press
Fortunately Stéphane was able to get an expert to testify that he was looking after the vineyards properly and he won his case before the tribunal.

During this tale of woe we tasted the honeyed and toasty 2006 Les Maisons Marchandelles, which also had some slightly unclean flavours. “This is the last vintage,” Stéphane suddenly announced. Sarah (the Wine Detective) and I exchanged shocked glances and assumed that serial adversity had finally driven Stéphane to give up his dream to be a vigneron. Fortunately this was a misunderstanding. “I’m giving up making Les Maisons Marchandelles because my wines need a long time to stabilise and this cuvee only has 18 months. In future all my wines will have 23-24 months in barrel. Les Maisons Marchandelles on argile-silex (clay and flint). Unfortunately it doesn’t get enough morning sun and it’s the morning sun that makes quality wine, evening sun gives you plonk.”

Next we tasted samples of the rich, concentrated and mineral 2007 Le Volagré that will be bottled in 2010. Stéphane: “I want to avoid having a malolactic fermentation”. Le Volagré comes from a vineyard at Saint-Martn-le-Beau, where the soil is more sandy. Then we moved onto the much fatter and honeyed 2006 with some toasty notes. “I’m not happy with the toastiness,” said Stéphane. “I had 10% new barrels in 2005, 20% in 2006 and none in 2007.

We finished by tasting firstly the sensational 2005 Le Volagré – wonderfully rich and honeyed but with great balance because of its acidity and minerality. Then 2005 Cloelote a 14% moelleux from passerillage with 70 grams of residual and 3.4 gms acidity, which was quite rich but balanced with good acidity but it was Le Volagré 2005 that really stood out.

The world divides into optimists and pessimists – those who see the glass as half full and those for whom it is half empty. Stéphane appears to be firmly in the pessimists’ camp. Throughout our visit he stressed the problems and, in particular, what was wrong with his wines. Our assessment on the evidence of the finished wines, admittedly a tiny sample, is that Stéphane is making good, individual wines and that it is newcomers like him that is making the small Montlouis appellation dynamic and interesting.

Before we left we had a quick photo opportunity and as I took the shots I realised who Stéphane reminds of: José Mourinho formerly Chelsea’s ‘special one’. 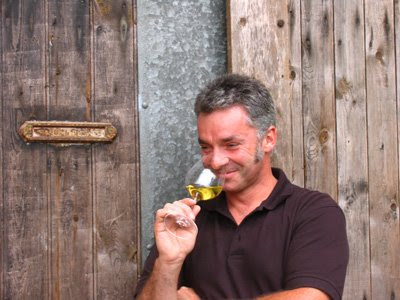