(Trade prices excluding vat)
Off to The Wine Wharf for a tasting of this often fascinating range of wines put together by Neil Irvine with some assistance from Trevor Gulliver. Sadly I was unable to accept the invitation to stay to dinner as I had to go on to a tasting at the RSJ (details to be posted here and on the RSJ News blog). It would have been particularly good to have been able to taste some of the wines being shown with food. 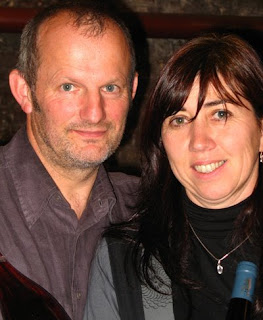 Joël and Christine Ménard: Domaine des Sablonnettes
A number of the growers were over with perhaps the Loire with the fewest number making it to London.

From the Loire I tasted wines from the following: Domaine la Haut Fevrie (Claude Branger), Vincent Ricard, Domaine des Sablonnettes (Christine and Joël Ménard), Catherine and Pierre Breton and Jean-Pierre Robinot, who had been due to come over but had had to cancel on Friday. 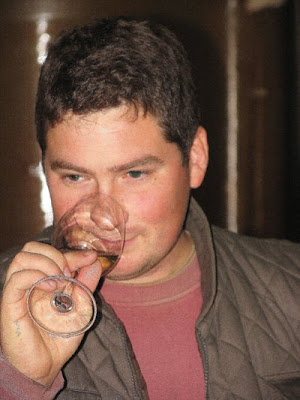 Vincent Ricard
My tasting got off to a flying start with the precise, racy and quite weighty 2006 Excellence Muscadet de Sèvre-et-Maine (£5.45) from Claude Branger, whose 26 ha Domaine de la Haute-Fevrie is in Maisdon-sur-Sèvre. Next up two wines from the talented Vincent Ricard and great to see that his wines are now available again in London. 2007 Le Petiot – the ‘basic’ Touraine Sauvignon – is grassy, citric and very much in the racy style of 2007. Next lovely rich and concentrated 2007 ? (point d’interrogation) (£15.15) – one of Vincent’s richer cuvées of Touraine Sauvignon. It comes from more than 70 year-old vines with a yield of 23 hl/ha and a potential of 14%. It was fermented in 400 litre barrels for three months with a total time of 11 months in wood. Just a 1000 bottles made of the 2007.

Next up was a range of wines from Domaine des Sablonnettes with owners Christine and Joël Menard in attendance. They have 12 ha in Rablay-sur-Layon with eight planted with Chenin Blanc plus a tiny amount of Sauvignon Blanc. They work organically and biodynamically. I have tasted their wines on at least a couple of previous occasions I find the wines patchy and this tasting added to this impression. Of the 10 wines shown I found one stunning and thrilling: the wonderfully precise, delicate and balanced 2007 Noblesse Coteaux du Layon Rablay, which carried off its 120 gms of residual sugar with ease and grace. Quite probably my wine of the whole tasting – certainly I didn’t taste a better one. 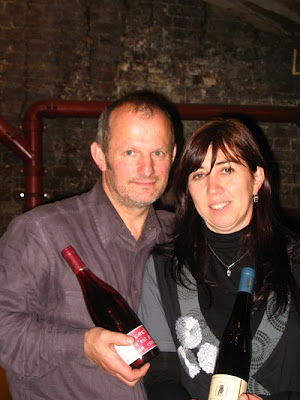 I also enjoyed the two rosés, especially the intriguing and delicate VDT Rosé Passarillé 2007 (£7.05) with its flavours of rosehip and red currant. Christine Ménard: We serve it as an aperitif, with summer dishes like melon and jambon cru. Also with desserts that use red fruits it works with all of the exotic cuisines – Thai etc. It would be interesting to know how well it would age for Anjou has a tradition of sweet age worthy rosés that has now virtually been lost.

I wasn’t convinced by three reds, especially the 2007 VDT Les Copains Aussi (100% Gamay – £5.45) and 2006 Les Beaux Vins Anjou Rouge (£5.45). In both I found a greenness in the finish. My preference was for the leafy VDT Les Copains d’Abord 2007 made from 100% Grolleau Noir with its good weight and concentration. Yes a touch rustic but that's probably the nature of Grolleau Noir.

Finally the 2006 Anjou Blanc Le P’tit Blanc (£5.45) is slightly in the oxidative style and I have considerable doubts about this approach. Offer me choice between a bottle of Le P’tit Blanc and one from their fellow Rablay producer Richard Leroy and it would be Richard’s every time or nearly every time as I guess I should always keep trying the different styles. 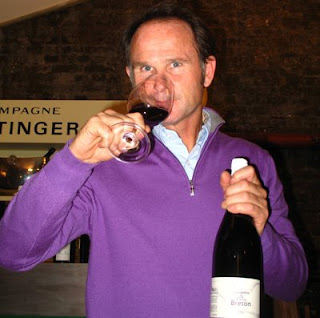 Pierre Breton and Les Perrières 2005
On the next table was Pierre Breton from Restigné in Bourgueil, who I have known for something getting on for 20 years. Pierre was showing four wines. One – the 2005 Les Perrières (£11.20) – I really enjoyed with all the rich, velvety, concentrated fruit of 2005. A bottle to enjoy now or confidently keep for 10-15 years at least. I also liked the supple but weighty 2006 Chinon Beaumont (£7.10). The other two wines added to my feeling that Pierre has lost his way over recent years. I have never seen the point of Trinch – the entry level Bourgueil. The 2007 at £7.10 is just green. Indeed all the vintages of Trinch that I have tasted over the years have either been green or dilute or both. Why would I want to spend £7.10 on an under ripe Bourgueil when I can buy a delicious Anjou Rouge from Vincent Ogereau or a Touraine Cabernet from the Clos Roche Blanche for less money and get ripe fruit?

It may well be that I’m missing something with Trinch as I compared notes with The Wine Detective who loved Trinch’s juicy fruit and minerality. I finished with Les Picasses 2004 (£11.20) – not properly ripe and green. I’d love to be able to put Pierre and Catherine Breton amongst the best of Bourgueil but sadly they are well adrift of Yannick Amirault , Pierre-Jacques Druet and Jacky Blot (Domaine de la Butte).

The last Loire table gave me an opportunity to taste the wines from Jean-Pierre Robinot (Ange Vin) in the valley of Le Loir. I had wanted to go and see Jean-Pierre when I was briefly in the area in August but unfortunately he was away that weekend. Hopefully I will get to see him soon. “I like wines that make me think,” said Neil when I asked him how when Robinot’s wines do in the restaurants. “We give away more than we sell,” was his candid reply.

JPs wines certainly make you think – push the extremes – push the envelope and perhaps from time to time tear it asunder. JP makes both VDT and Jasnières. As a rough guide the Jasnières are closest to the main stream as they have got through the agrément. Six whites all Chenin Blanc were on show. I started with the mid-gold coloured and quite oxidised 2005 Cuvée Bistrologie VDT (£10.70) – its initial weight giving way to a lean finish. Then to the 2003 Symphonie du Temps VDT (£14.20) – golden coloured, toasty nose, rich but oxidised though intriguing with good length. 2005 Charme du Loir VDT (£14.70) was definitely on the wild side – again toasty and honeyed nose, good weight but very marked oxidation.

Then on to three Jasnières, starting with the 2004 Lumière de Silex (£13.20) – mid gold colour, rich, concentrated texture and curiously slightly heady although only 12% alcohol. 2004 L’Iris du Loir (£19.20) was slightly less deep coloured and with greater freshness, more delicate and quite attractive – perhaps my favourite white. Lastly the rich and weighty 2004 Juliette Robinot (£34.20) with a markedly oxidative character but still with good length.

The last wine was the 2005 Nocturne Rouge VDT (£19.20) from 100% Pineau d’Aunis and was my preferred JP wine. Le Loir is the stronghold of Pineau d’Aunis, which here and elsewhere in the Loire is enjoying a revival of esteem. This was typically peppery with good juicy, silky fruit and length of flavour. Good but at nigh on £20 before vat and £ 22.56 with it, is it really worth it, especially when the 2006 Rouge Gorge, Coteaux du Loir, from Eric Nicolas’ Domaine de la Bellivière can be bought for £13.95 from The Wine Society?

After the Loire I had time to taste wines from Domaine Olivier Pithon, run by Jo's 'baby' brother, in Calce, Roussillon. On this occasion I particularly liked the crisp, mineral and long 2002 D18 VDP Côtes Catalanes (£14.90), the rich and concentrated Grenache and old vine Carignan grown on schist – 2006 La Coulée, Côtes du Roussillon (£9.00) and the delicious, powerful and mineral 100% old vine Carignan 2006 Le Pilou (£13.15).

It's funny--though hardly news--how two people can have such different reactions to the same wine. I'm with you as far as recent vintages of Breton's Trinch! are concerned (I've found them far too tannic to be enjoyable), but I have tasted the 2004 Les Picasses twice and 'green' just isn't something that came to my mind. I found it nicely ripe and very appealing. To my palate the 2005 Clos Sénéchal is stunning.

Steve L. Many thanks for your comment. I'll try to taste the 2004 Picasses again. It may be coming after the very good 2005 Les Perrières was a problem. Sadly I have never taste a good vintage of Trinch.