I was reminded today by a tasting note on the wine forum of Tom Cannavan's wine-pages that I have been meaning to post something on the 1996 vintage.
Tim York noted that the 'Chinon 1996 from L’Echansonne Sélection Noël Pinguet - Olga Raffault was a nice youthful seeming, savoury and robust Chinon full of red fruit, especially plums and damsons, abundant acidity offset by good body and an appealing wet leather tang'.

1996 Clos Rougeard, Les Frères Foucault,
Saumur-Champigny
For some time I have thought that 1996 is the best vintage the 90s decade, especially for reds, notwithstanding the fine and very appealing 1990s. 1996 is a classic good Loire vintage. It has a lovely balance of fruit, structure and acidity and has aged well as Tim's comment 'nice youthful seeming' bears out. 1996 and 1997 were both good years and naturally frequently compared. 1997 has always been ripe and opulent – a crowd pleaser. While the best have lasted better than they thought they might, they don't have the same level of balance and complexity found in 1996 reds. 1995 was potentially a good year for reds too but while I've had a few good 1995s the high level of acidity has meant that they have taken a long time to come round and it seems likely that marked acidity will continue to be a feature of the 1995s.

As well as the Clos Rougeard above other 1996 reds I have recently drunk and enjoyed include Les Châtains from Domaine de Nerleux, Grand Clos from Château de Villeneuve and the Anjou Villages from Domaine de Bablut. The 1996 Gamay from Clos Roche Blanche was showing well about two/three years ago – will have to check on its progress. 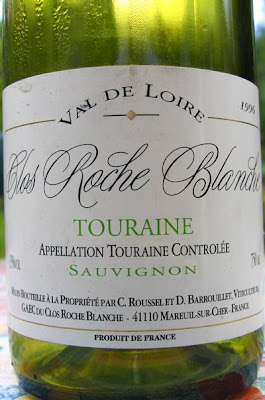 Not the Clos Roche Blanche's Gamay
but the 1996 Touraine Sauvignon
1996 is also a fine year for dry whites and demi-secs along with good sweet wines. With the sweets 1995, 1996 and 1997 make a fascinating trio with perhaps the 1997s being superior.

I'm more than inclined to agree, Jim, about the quality of 1996 in general. I'm particularly curious as to your thoughts about '96 in Savennières. I have a decent number in the cellar and have recently been toying with the idea of staging an informal horizontal tasting.

Hi David. I'm afraid that I ahevn't tasted much Savennières 1996 recently, except for the 1996 from Madame Laroche which was quite oxidative. It was at a tasting and some loved it, while others had doubts. I was among the doubters. This may well be representative of Sav 1996 more an example of the decidedly variable Mme Laroche wines.

I would have thought that now would be a good time to look at some of those in your cellar. If you go ahead I would be interested to know how they turned out.