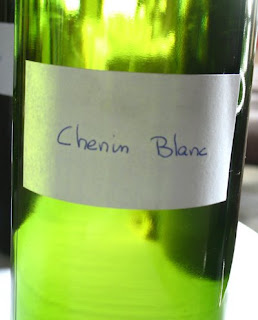 2008 Chenin Blanc (tank sample)
from Emmanuel Delicata
Today at The Xara Palace in Mdina, Malta I tasted my first Maltese Chenin Blanc with Georges Meekers, who is head of sales at Emmanuel Delicata and who wrote the Wines of Malta – the essential guide (published in 2007). He is also the school director of Wine Campus an on-line wine school.

The Chenin was a 2008 tank sample and the first real vintage that has been produced by growers who supply Delicata. They did make a little last year but it wasn't good enough to bottle as a separate varietal. Characteristically Chenin Blanc it has pear, quince, apple and some citric notes. More South African in style than Loire, it lacks a bit of concentration and texture but should make an easy drinking, attractive aperitif when it is bottled around January 2009, especially if it is around the €4 mark when it hits the Maltese shelves. 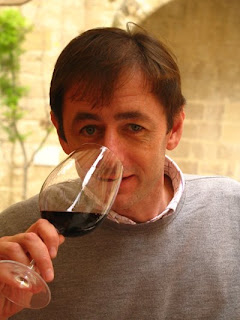 The Chenin Blanc was part of a selection of Delicata's latest releases and tank samples that George and I tasted. Fascinating though it was to taste a Maltese Chenin, the most interesting wine we tasted was a 2008 tank sample of Ġellewża, a red indigenous variety. From vines of indeterminate age – probably 35-50 years – bush vines grown in small parcels and probably largely organic by default. Gellewza apparently has a reputation as difficult to ripen. Probably in part due to excessive yields but also because producers traditionally like to get their harvest finished by the 8th September when there is a festival that traditionally marks a change in the local weather. After the 8th the dry summer spell often breaks.

As Ġellewża is an indigenous variety it is hardly surprising that it wouldn't be ready in early September. The best of the local varieties invariable ripen towards the end of September or early October irrespective of the climate because, of course, the indigenous grapes have adapted to the conditions to give the maximum hang time and a chance to develop maximum flavour. 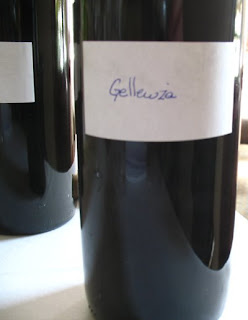 Ġellewża should have a dot above both the G and the z but my computer can't manage this – or I can't (now in place thanks to GM-23.11.08) . Anyway the 2008 has attractive sweet damson and plum fruit and is very easy to drink. It's a fun wine –just like Beaujolais should be. Unfortunately it is not sure that Delicata will release their Ġellewża as a single variety and it may disappear into a blend, which would be a shame. Today fortunately countries like Italy and Portugal really prize their indigenous varieties. The tidal wave of 'international' varieties is abating with the realisation that a Chardonnay that ripens in late July/early August is of minimal interest. With Ġellewża, Delicata have a story to tell and a story of a variety that I assume is unique to Malta. Served slightly chilled it would be a wonderfully uncomplicated red to enjoy in spring and summer.

Dear Jim,
It took me a while but I (guess I)figured it out.
Yes, apparantly there’s more to configuring a tasting note of Ġellewża than describing what’s in the glass.
The word Ġellewża is typed using the following ‘secret’ code:

Cheers or Sahha! – Oh, that should be Saħħa, I believe!

Many thanks for that Georges. have made the corrections. Jim

Ġellewża as in hazelnut? Why does the grape have such a name? Or does Ġellewża have other meanings, too?

Good question. Unfortunately I have no idea but will try to find out for you.

Ġellewża is indeed the Maltese word for hazelnut. Although the origin of the name is unknown, it has been suggested that the grape variety is called Ġellewża because the (smaller) grape berries are somewhat similar in shape to this nut.

Many thanks Georges. Trust that answers your question Otto. Jim

Thanks Georges! But now I'm interested in the word, because in Arabic it is بندق(bandaq), but Ġellewża looks like an Arabic word, too, so what is the word's etymology?

Again not something I can answer Otto – Georges perhaps?

I usually ‘do wine’ not etymology, I’m afraid to say, but it is worthwhile looking into (again) of course. As you have guessed, Ġellewża is a Maltese word. So far my research has not rendered an explanation of the origin of this specific word.
With regards to the language, Wikipedia - I cannot believe I’m quoting Wikipedia here! - states that Maltese (Maltese: Malti) is descended from Siculo-Arabic (the Arabic dialect that developed in Sicily and the rest of Southern Italy), but with a large percentage of borrowed vocabulary from Italian (particularly Sicilian) and English (and maybe even French). I believe this to be correct. It is the only Semitic language written in the Latin alphabet in its standard form.
I’ll try and ask an acquainted expert in the linguistic field for help regarding the origin of Ġellewża for you, though.

So, here's an update. Olvin Vella, assistant lecturer UoM , confirmed ‘ġellewża’ derives from Arabic ‘ġilluwż’.
I dug a little deeper still and accidentally found out that there’s apparently some confusion when it comes to naming hazelnuts and pine nuts in Arabic-speaking countries. The hazelnut, ‘fandoq’ in new Persian, has also been called ‘jellawz’ in Arabic.
I understand that ‘jellawz’ is a disfigured Arabicized form of Persian ‘čel-ḡuza’, which actually refers to the walnut (Lit. ‘forty [wal]nuts’).
This may explain the odd origin of the Maltese word ġellewża, but the origin of the grape native to Malta remains shrouded in mystery. It would be a daring caper, though, to say that, simply because of the word’s etymology, the grape, too, originated in Persia and was brought to Malta by the Arabs.

Thanks George. Time I think for some DNA profiling!

Hi Jim,
In fact, DNA testing of some samples has already been carried out years ago in Australia. Reportedly no matches were found adding clout to the assumption the grape is unique to Malta. The same goes for the native white variety Girgentina, but don't send me down the etymology path again please!

Ps. I have linked this post on the wine campus blog, too.