My review copy of the seventh edition of Robert Parker’s The Wine Buyer’s Guide arrived on Friday. Initially I thought that the courier company had delivered a brick but no it was the two-volume guide (France and then the Rest of the World) that topped my kitchen scales at 3 kilos. The flippant answer to what is the difference between the sixth and the seventh editions is that the seventh weighs another 500 grams.
A rather more serious reply is that this is the first edition which has involved the new Team Parker with some dramatic improvements in areas where Parker was previously weak. Take the Loire. Previously Robert Parker has largely ignored the Loire. His World’s Greatest Wine Estates included an embarrassingly poor and inaccurate profile of Domaine Huet. If submitted as a school essay it should have received less than 50 points. Robert also claimed that 90% of Loire wine was white – actually about 55%. The sixth edition of The Buyer’s Guide had a bare 11 pages, while the seventh treats the region to 40 pages.

Pouilly-sur-Loire: halfway down the Loire and
the start of the internationally known vineyards
David Schildknecht covers the Loire as well as Alsace, Beaujolais, Burgundy and Languedoc-Roussillon plus Austria, Germany and Central Europe for Team Parker. Clearly this is someone who knows the valley fairly well and whose general conclusions and advice I largely go along with, although I do have some quibbles. Anyway to the positives first.

David begins by stressing the great value the Loire offers. ‘It is high time wine lovers recognize it as the bargain garden of French wines. From few if any other places on Earth can one still harvest such affordable yet distinctively delicious wines, a vast stylistic and varietal range. The Loire’s wines generally offer forthright, generous vinous personalities and food compatibility while frequently harbouring a depth that reflects their historically and geologically layered origins.’ The work of several good US importers/agents such as Joe Dressner and Kermit Lynch is singled out.

He is properly critical that too much Loire wine is poor: ‘There are also copious quantities of lacklustre or flawed wines from each of the Loire’s more than 60 appellations.’ 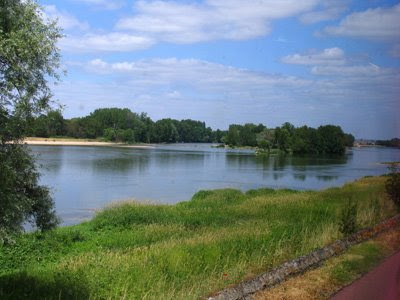 The Loire near Savigny-en-Véron
Working in from the Atlantic David highlights the value, versatility and ageability of good Muscadet, the fine dry whites of Anjou – ‘among the world’s potentially profound and ageworthy wines’ – and the sweet wines from the Coteaux-du-Layon and Coteaux de l’Aubance – ‘among the most ageworthy on earth, as well as some of the world’s great bargains’. He warns against allowing Chenin Blanc to go through a malolactic fermentation – a sentiment that Jean-Pierre Chevallier (Château de Villeneuve) and Jacky Blot (Domaine de la Taille aux Loups) would happily concur. Montlouis and the Coteaux du Loir, including Jasnières, are highlighted as particularly dynamic appellations. He rightly complains that too often it is impossible to know the style of Vouvray or Montlouis that you are buying because of the refusal of the producer to indicate on the label whether it is sec, demi-sec or moelleux.

He picks out the potential and pitfalls of both Chenin Blanc and Cabernet Franc and the need to pick them ripe and, preferably by hand. David is absolutely right to headline the bargains of Touraine – not just Sauvignon but also reds including Côt. ‘The handful of really successful Touraine Sauvignons are more delicious and interesting than than 75% or more of whats’ grown in Sancerre but cost half as much (and they can chase the growers of South Styria, Austria, or Marlborough, New Zealand around the globe as well).’ It is, however, a pity that guide’s sketch map of The Loire Valley and Central France omits the vineyards of the Cher Valley.

There are already some very exciting wines coming from a small but increasing number of producers in the Cher Valley with a growing recognition that there are some excellent vineyard sites, particularly around Montrichard, that are not being exploited.

David is rightly critical of the standard of some of the standard of some Sauvignon Blanc coming out of the Central Vineyards: ‘A background of high yields and widespread machine harvesting drags down the quality of many Sauvignon from the eastern Loire, and thin or underripe wines are turned out routinely even in balmy years. In Pouilly-Fumé in particular, lesser wines may exhibit an unpleasantly hard-edged combination of marginally ripe fruit, high acidity, and austere minerality.’ He is rarely a fan of producers who ‘treat” their Sauvignon from their oldest vines to ‘a stay in small, young barrels’ as ‘at the most one in five of these cuvées seems to reveal any synergy’. 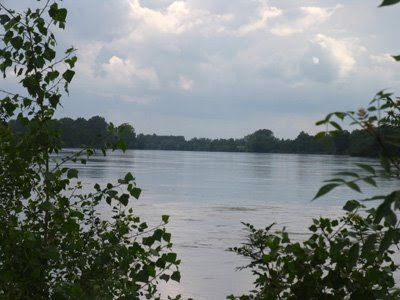 The Loire not far from Rigny-Ussé
My quibbles then? They are a few straight errors – not surprising given the scope of David's responsibilities with Team Parker! Anyone looking for the Coteaux du Giennois said to be ‘well south-west of this stretch of the Loire (meaning Sancerre and Pouilly)’ will search in vain as the Coteaux du Giennois is to the north of Sancerre and Pouilly and, since its promotion to AC status, its reds have to be a blend of Gamay and Pinot Noir. In Pouilly there are currently just 33 ha of Chassellas – hardly a ‘considerable amount’. As far as I know the local name for Pineau d’Aunis is Chenin Noir and not Chenin Rouge. The regulations for Bonnezeaux require that the grapes have a sugar content of 238 grams per litre not that the wine has an ‘improbable 230 grams of residual sugar’. I suppose Coteaux de Saumur could be described as ‘off-dry’ but this rather stretches the term as the regulations require the grapes have 221 grams of sugar.

I think David underestimates the ability of AC Touraine’s wines, particularly some of the reds, to age, He advises that ‘nearly all best drunk within 2/3 years of bottling’. Having enjoyed a bottle of Henry Marionnet’s Gamay Primeur 1976 only three or four years ago and many reds from the Clos Roche Blanche from various vintages between 1999 back to 1993 I find they have considerable potential to age, although I would agree that this applies only to the best producers. He is also too dismissive of present quality of Sancerre Rouge – ‘numerous pretentiously extracted and barriqued examples’. Amongst the appellation’s best and most ambitious producers there has been a revolution in the treatment of Pinot Noir in Sancerre over the past 15 years. While there may be some examples of over-extraction and over-oaking I think this is only to be expected during a time of experimentation. Furthermore thoughtful producers, like the Vacherons, are aware of this and are already making adjustments.

I’m not fully convinced by the value or worth of a rating system but many people like them and it helps to offer some order/guidance, useful in a large region like the Loire, and it is interesting to see who is included. The ratings run from five stars (excellent) to two (good).

The absence of tasting notes in the seventh edition has been commented upon on some internet wine forums. I’m no great fan of lengthy tasting notes, which rank along with drum solos and the common fly as a waste of time and spece. As there were no Loire tasting notes in the previous edition there is no change here. However, the consequent lists of wines with just scores and drinking windows are as interesting as reading a telephone directory or a loco-spotter's guide.

Unless lists of wines and their points fascinate you, there isn’t sufficient other matter to make the £60 cover price, although amazon have the hardback for £39 and the paperback for £18.24.

Thanks for the review and the tip about the p/b price on Amazon - my latest version is several editions old, so I've added it to my wishlist (hoping for generous rellies at Yuletide).

Nice seeing you at the RSJ tasting on Monday,

Many thanks for your comment.Hope you enjoyed the tasting on Monday.