Young Wine Writer of the Year 2013: the shortlist 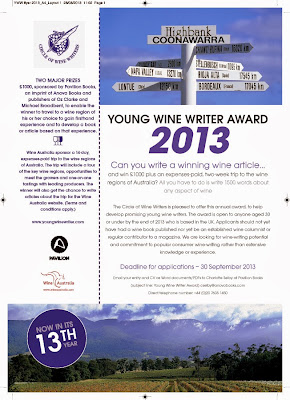 Many congratulations to the following who have been shortlisted – their names are in alphabetical order:

There were nearly 50 entries this year and just as last year the overall standard was extremely high.

The winner will be announced on 20th November at a presentation of Australia House – Wine Australia is a major sponsor of the award. Further details about the award here.
Posted by Jim's Loire at 18:10