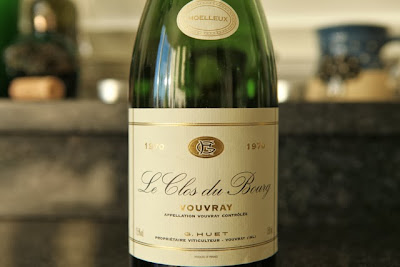 On Saturday with our friends in Cheltenham we started the evening with the 1970 Clos du Bourg Moelleux, Vouvray, Domaine Huet.


Light to mid gold, beeswax nose with some oxidation, much more exciting on the palate honeyed with lovely, still fresh acidity in the finish. Probably should have decanted it immediately. Instead decided to decant after I had poured our first glass. Decanting certainly helped as it became increasingly complex as the 1970 opened up in the decanter and our glasses. Although a memorable bottle, I suspect that there are some better bottles of this wine around.

The bottle of 1970 was also memorable as it was the last old vintage that we bought from Domaine Huet before the old stock was sold by the Huet family to Berry Bros & Rudd. When CRM went to buy the 1970 she fondly remembers being taken through the limestone cellars to where the old vintages were carefully stored in bins. A bottle of the 1970 was selected. Then tenderly and carefully carried back up to the offices where it was labelled. Labels are not attached to the bottles in the cellar as they quickly spoil in the damp conditions.

1970 was a year before Noël Pinguet started working at Domaine Huet. Noel took over running the domaine in 1976.

Sadly will now have to think twice before opening older vintages of Huet!


2012
Now we fast forward 42 vintages to 2012. This was the first vintage since Noël Pinguet left Domaine Huet in acrimonious circumstances in February 2012. Although Jean-Bernard Berthomé, the vineyard manager and now in charge, was long established with over 30 years service at the domaine and Benjamin Joliveau had joined the staff several years ago, Noël was always going to be a hard act to follow.  Unfortunately nature has not been kind and has dealt Vouvray a very tough hand in both 2012 and 2013.

We saw Noël Pinguet in late September 2013 when we visited Domaine Picard-Jourdan (Chinon). Noel was there to give advice on biodynamic viticulture. This domaine has been biodynamic for some time but the new owners - Annick and Francois Jourdan - wanted advice and, probably, reassurance from Noel.
Domaine Huet was amongst the first wine estates in France to adopt biodynamics. Unlike Nicolas Joly, Noël's is a pragmatic approach: he uses biodynamics because it works for him.

Noël Pinguet and his wife Françoise have now cut their ties with Vouvray: they sold their house - Le Mont - in July and have moved to the Ile de Noirmoutier on the Atlantic Coast. They already had a holiday home here. They have also sold this and bought a larger house. I guess Noël just wanted to get away and not to be continuously reminded of Domaine Huet where he was spent so much of his working life. Noel is clearly angry and bitter over the way things ended between him and the Hwangs at Domaine Huet.

Equally there are sensitivities on Sarah and Stefan Hwang's side with perhaps a tendency to view comments as more critical than they actually are.


In late September I bought a couple of bottles of Le Haut Lieu sec and Le Clos du Bourg sec. The 2012 Le Mont sec wasn’t on sale at that time but I hope to taste this soon – certainly during the 2014 Salon des Vins de Loire in early February 2014.

I opened one of each of them during Chris Kissack’s stay with us in Touraine in early October. All three of us (Chris, CRM and myself) were disappointed with how these two wines were showing. It may have been a bad moment for them and I plan to try the other two bottles next year in March when they may well have developed further. Even then it will be unfair to try and judge Domaine Huet post-Pinguet.


The Clos du Bourg was certainly better than Le Haut Lieu – a little more aromatic, richer, a little sweeter and fuller with some peachy character. More complexity but still quite lean austere finish but a little peach there. Greater length than Haut Lieu.


Wanting reassurance after tasting the 2012s, we opened this 2002. Once again it confirmed what a wonderfully balanced vintage 2002 is – almost seamless perfection! Complex honeyed and quince fruit with still lovely freshness through ripe acidity in the finish. This will happily keep for many years providing I can restrain myself!

It will be interesting to taste the nascent 2013s at the Salon des Vins de Loire and retaste the 2012s.

Jim, hard feelings are understandable in the heart of passionate people. This doesn’t mean to say we wish them to last forever, nor they are commendable. I was fortunate enough to be shown around twice by Gaston Huet himself. I must have taken a glimpse at Mr. Pinguet but we were not properly introduced to each other. I just went to look at my Vouvray cabinet. I’m down to 2 Clos du Bourg 1989 1ères tries, and also possess a few bottles of Haut-Lieu moelleux 1989, which don’t say 1ères tries. Next time you pay us a visit, touring Roussillon, remind me one of these gold syrups should make a liquid appearance.