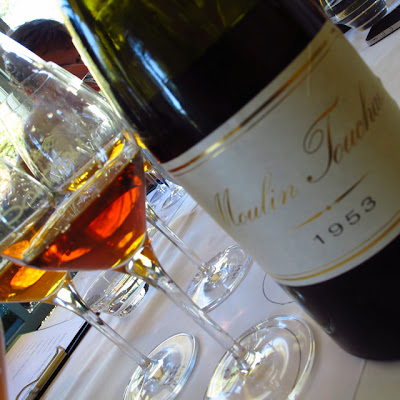 The 1953 Moulin Touchais
With 35 hectares of its 150 hectares of vineyard dedicated to sweet wine, Moulin Touchais, based in Doué-la-Fontaine, must be one of the largest producers of Coteaux-du-Layon. During the late 1970s and early 1980s the Moulin Touchais Coteaux du Layons were a feature of the British high street. They were part of Sainsbury's Vintage Selection and even made it to Forest Hill where I remember buying the 1959 and 1964. These were labelled Anjou for the UK market – declassified from Coteaux du Layon as Joseph Touchais thought (doubtlessly correctly) that few Brits would have a clue what Coteaux du Layon meant or where it was but they might well have heard of Anjou.

When the distribution company was bought by Castel, Joseph Touchais decided that he would no longer use the company to sell his wines and Moulin Touchais gradually disappeared from our shelves.

Moulin Touchais dates back to 1787 and has now involved eight generations of the family. The company is now managed by Jean-Marie Touchais, whose father, Joseph, really established the practice of aging the sweet wines for a minimum of ten years before putting them on the market. During the 1950s Joseph found that sweet wines were not selling, so decided that the best way to sell would be to put them away and release them when they are closer to being ready to drink. There are now over a million bottles in the Moulin Touchais' cellars in Doué-la-Fontaine.

Only the best cuvée is bottled and sold as Moulin Touchais. The other wines, the normal wide gamut of Anjou-Saumur, made on the 150 hectare estate are sold off in bulk with a substantial quantity going to make sparkling wine in nearby Saumur. 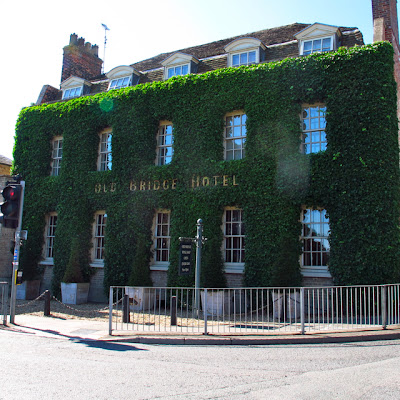 The Old Bridge Hotel in Huntingdon

Yesterday I was privileged to be invited by Richard Kelley MW and Frederick Wilbrenninck to a vertical tasting of Moulin Touchais running from 2003, which is due to be released in January 2013, back to the 1953.

Richard used to be with Richards Walford but moved to ABS Wine Agencies around a year ago and is now planning to list the Moulin Touchais wines. Frederick is in charge of their distribution in France. 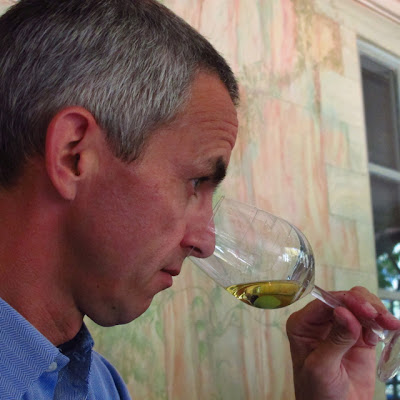 20% of the grapes are picked early to provide acidity with the rest picked later. Frederick told us that the aim is not to produce super concentrated wines. Apparently sugar levels are generally in the range of 80-90 grams of residual sugar. I'm not quite clear how far this house style has in part been determined by the lower incidence of noble rot in the upper part of the Layon in comparison to the steep slopes that overlook the Layon from Bonnezeaux westwards. The Touchais vineyards are in Martigné-Briand and Tigné. When driving westwards along the Layon the slopes are gentle until you start to approach Bonnezeaux after leaving Martigné-Briand.

Light gold with more colour than 2002. Honeyed rich opulent palate with good concentration. One of the richest wines in the tasting but still well balanced, although the acidity is much less apparently than in some of the other vintages. A brief discussion over whether this will last. I see no reason why it shouldn't be as long lived as vintages like 1947 and 1959 as it has always been the hot years that have been the longest lasting.
Vintage 2002
Lighter gold and markedly more acidity and freshness than the 2003. This has the lovely seamless balance between fruit and acidity that is so characteristic of the 2002 vintage. One of my favourite wines.
Vintage 2001

Similar colour to 2002 but richer, while less fresh than 2002 though acidity comes through in finish. Marmalade character.
Vintage 2000

Little aroma but with some honey but least opulent of this flight, attractive freshness and fair effort for a difficult vintage with rainy conditions from mid-October onwards. Sarah Ahmed found this a touch earthy.
FLIGHT TWO – The Late Nineties
Vintage 1999Light of touch of sulphur. Not quite freshness and purity of the previous flight. Some honey, citric character and fair length. I didn't find this exciting, although some other tasters were much more impressed.
Vintage 1998
Light gold, attractively fresh, clean, good weight for difficult vintage with some length but a little dilute in finish. Good apéritif style.
Vintage 1997Light gold. Change of gear from 1998 and the first of three very good vintages. Rich opulent mouth filling concentration but still acidity there. Good balance honey, agrume – passion fruit and tangerine. As always with 1997 a crowd pleaser.
Vintage 1996A little deeper gold than 1997, some evolution on nose, honey and apricot, lovely texture, clean, good balance with perhaps a hint of drying in finish but has that typical Chenin touch of bitterness in the finish. More complex and intriguing than 1997. One of my favourites.
Vintage 1995 (limited availability)
Similar colour to 1996, again evolution on nose, mouth filling texture, good length and fine balance impressive though less opulent than 1997 and less complex than 1996 but completes a fine trio.

A run for three difficult vintages but ending the the fine 1990. Light gold, bitterness and acidity on the nose, not surprisingly noticeably less rich than previous trio – a more simple, clean apero style with high acidity.
Vintage 1992
Light gold, rather old style Chenin nose, surprisingly mouth filling for this high yielding vintage. Marmalade and other citric fruits with some length. Although inevitably short in comparison to 1990. Decidedly a pleasant surprise.
Vintage 1991
The severely frost affected vintage with yields on 30% of normal. Some sulphur, quite rich honeyed fruit and a little dilute in the finish.
Vintage 1990 (not available)
Mid-gold, though not as deep coloured as some wines from the 1990 vintage.   Opulent honeyed fruit but also some restraint too. Texture mouthfiling opulence perhaps lacks just a little complexity and freshness in finish but long lasting flavours. Fine.
Sadly 1989 has sold out so we weren't able to compare these two excellent vintages
FLIGHT FOUR – The Late Eighties


FLIGHT FIVE – The Early Eighties
The flight was easily the weakest of the seven. Partly because they are all from unpromising vintages but also the winemaking appears to be faulty, especially in the case of the 1982.
Vintage 1984

Slightly unclean honeyed nose, definite aromas of aged Chenin considerably better on palate and well balanced. Probably the best of the four. 1984 is a difficult vintage to shift – I well remember the stacks of the 84 in the cellars of the Clos Baudoin some 15 years or more years later.


Vintage 1981 (not available)
Mid gold, quite opulent nose but a fishy, weight of fruit with a decidedly evolved rancio character like the aroma of an old Cognac. Also butter and honey. Drying a little in finish.

Vintage 1980
Mid gold, very odd unclean nose – some tasters thought it was cork but not sure just unclean. Despite the vintage and lack of cleanliness, there is some richness of fruit but still one to avoid. 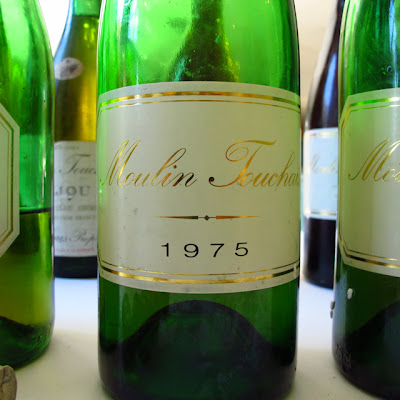 
FLIGHT SEVEN – The Sixties and Fifties

Vintage 1969 (not available)
Sadly another wine let down by its cork – seriously corked and getting worse with aeration. However, better on the palate with considerable concentration underneath the corkiness. Quite a youthful palate with good balance, length and freshness for age. A real shame it was a faulty bottle.

Vintage 1961 (not available)
Leon Stolarski thought this smelt like a red wine. Honey with some meaty flavours thrown in, the maderisation gives it an amontillado/dry oloroso character. A slightly drying finish but very fine.

Vintage 1959 (not available)
Older more evolved deep colour – walnut, rancio and raisiny character reminded Sarah Ahmed of a Madeira. Good balance also toffee caramel characters developing, length and well balanced. Although good it didn't stand out as you would expect for a 1959.

Vintage 1953 (not available)
Mahogany colour, mouthfiling texture, rancio and citric character. Although beginning to show its age this remains a fascinating wine to taste and drink.

A really interesting tasting with some very fine wines but equally a few disappointments. Noticeable that the older wines tend to take on more colour than those of a similar age and older from Vouvray, which also tend to remain more youthful and fresher. Thanks once again to Richard and Frederick for putting this on 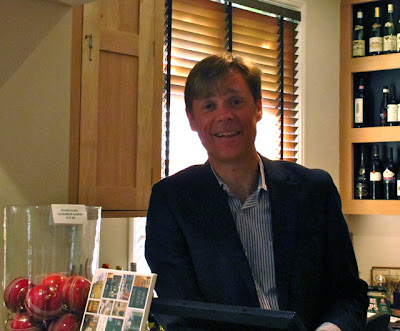 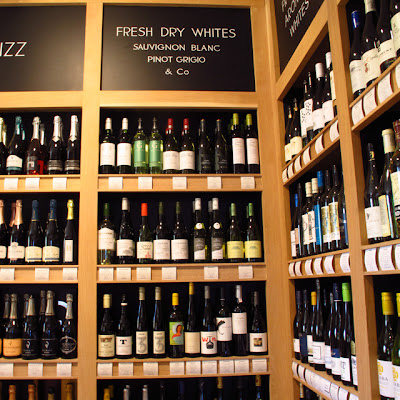 The wine shop in the hotel 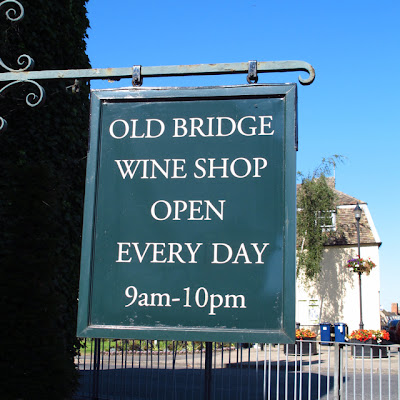