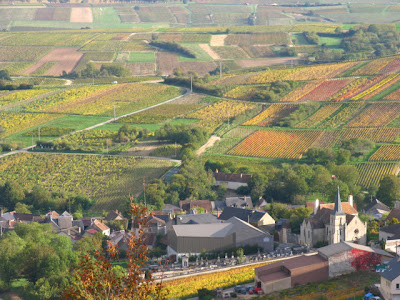 Village of Chavignol surrounded by vines

Red Loire over £10 Trophy: 2010 Sancerre Rouge, Paul Thomas
I have no doubt that some people will be surprised that a red wine from Sancerre has won the 2012 Trophy for the Best Loire Red. Famous for its whites, Sancerre is much less well known for its reds.

However, prior to the arrival of phylloxera here at the end of the 19th century, Sancerre produced mainly red wine from Pinot Noir, Gamay and doubtless other red varieties now forgotten. Today only 25% of the vineyard is planted with Pinot Noir. Most Sancerre Rouge used to be thin and light as it was made from high yields. However, some 15 years ago a few producers started taking Pinot Noir seriously and there have been dramatic improvements in quality. This has had a snowball effect with each year more and producers opting to reduce yields and to be much more selective with the grapes they use to increase quality.

Domaine Paul Thomas is in the centre of the village of Chavignol. Although I have been aware of their wines, I have not yet visited them. Will make sure I put this right next time I’m in Sancerre!

The domaine has nine hectares of vines ­ – 2.5 Pinot Noir and 6.5 Sauvignon Blanc. Raphael Thomas, whose grandfather established the domaine during the 1950s, and Claire Bonnard now run the domaine.

“We changed our approach to the reds a few years ago. Grassing over the vineyards reduced the yields and we do a lot of work in the vines thinning out bunches making sure they are well ventilated. We pick by machine and use a large sorting table to make sure we only use good grapes. Our red Sancerre is vinified and aged in stainless steel. The 2010 was bottled in January 2012.

The Domaine Thomas is a good example of the new approach having more concentration and structure but still retaining delicious fruit. Only 7.90€ at the domaine!

This profile has been published in the October 2012 edition of Decanter.