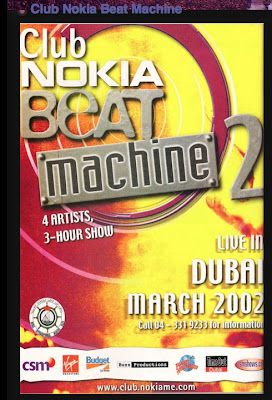 Club Nokia Beat machine March 2002 –csm
Here are two accounts from Pancho Campo MW of how he came to leave Dubai. The first was the version sent to speakers at WineFuture Rioja 2009 on 1st September 2009 when the news of the Interpol notice was about to break. A similar account was also given to the members (MWs) of the Institute of Masters of Wine. The second is an extract from a profile of Campo from the official programme of I Simposium Internacional Del Vino Marbella 4th and 5th June 2004 organised by Pancho Campo and The Wine Academy Marbella then part of CIE Marbella.
It is interesting to compare and contrast the two accounts:
Email 1st September from PC to speakers at WineFuture Rioja 09 (held Nov 2009)
'Dear XXXXX,


I want to inform you personally about a delicate issue that is affecting me and my family. Because you are a participant in WineFuture-Rioja `09 I believe it is important for me that you become aware of this situation, directly from me and not through a 3rd party. It is the minimum I can do after all the trust you have put in me and in The Wine Academy of Spain.
Between 1997 and 2002 I lived in Dubai where my wife, her family and I had an event management company specialized in musical and sporting events. In 2000, a former client offered to buy some shares into the company and got involved with us. Unfortunately, due to the September 11th attacks on NY, it was impossible to get artists and athletes to travel to the Middle East. Sponsors pulled out and the business ended up closing down in early 2002.
In February of 2003 my wife, my daughter and I decided to return to Spain because we no longer had a business and the war in Iraq was imminent. Before leaving, we informed the Spanish Embassy that we were moving back to Spain in case I was needed to be contacted. Since then, I have been living in Marbella, working at The Wine Academy of Spain and traveling around the world promoting Spanish wines and helping create awareness about climate change, as you may know.'
(I have highlighted some words in bold red in both articles.)
Extract from a profile of Campo from the official programme of I Simposium Internacional Del Vino Marbella 4th and 5th June 2004. Last two paragraphs
The attack on New York's Twin Towers on September 11 was a serious blow for Pancho and his company. More than 20 events had to be cancelled due to the international crisis and the fear people had of travelling to the Persian Gulf. Among the events that had to be cancelled were George Benson, UB40, the Vienna Boys' Choir, Gloria Gaynor, Kool & The Gang, the World Cup Trial and Shaggy. More than 8 months went by before concerts could be organised again. "The 11-S almost ruined me and we nearly had to close down the company, it was a disaster for everybody." "Imagine what it was like trying to organise events in the Middle East after such a tragedy.

After a very unfortunate time, Pancho recovered with the Shaggy concerts and the techno music festival "Nokia Beat Machine," but most of all thanks to the Pink Floyd concert, the largest and most sophisticated act the Middle East has ever seen. This was followed by other concerts such as Jamiroquai, enabling Pancho and his company to recover fully after 11-S. Once everything was going extremely well again, the United States began its plans to invade Iraq. Because of this, Pancho decided to return to Spain and definitely leave the Middle East, Two weeks later the Iraq war exploded. It would take almost a year before Dubai hosted another concert. "My decision was very timely because otherwise we could have been ruined, and in Marbella things began to work well immediately."
**
Anonymous on the recent Pancho Campo False claims regarding the Institute post has had much to say about this investigation into the activities of Pancho Campo. I'm now ready to accept one fault: I accepted Campo's claim that his events promotion business went bust in 2002 due the fall out from the 9/11 attacks on New York's World Trade Centre in 2001. Given Campo's account of how his business recovered in 2002 along with details on the website of CSM (Center Stage Management) run by Jackie Wartanian, Campo's ex-business partner in Dubai, it now seems very probable that CSM has never ceased trading since it was set up in 1999. It would appear that 9/11 wasn't fatal to the business as CSM promoted the Club Nokia Beat Machine in March 2002. Then on 15th April 2002 Roger Waters from the Pink Floyd played the Gold & Yacht. This, I assume, is Campo's famous Pink Floyd concert.  Jamiroquai played at the Aviation Club at the Dubai's Tennis Stadium on 10th October 2002. Jackie Wartanian put a substantial sum of money into the company at the end of 1999, so it is quite possible that she was the majority shareholder.
Campo claimed to his WineFuture Rioja speakers that 'we informed the Spanish Embassy that we were moving back to Spain in case I was needed to be contacted'. This claim is at odds with the account given in autumn 2009 by Vicente Cacho, the Spanish Consul in the United Arab Emirates, to Harold Heckle. Campo did visit the Spanish consul but it was to arrange for passports for his wife and daughter.
Cacho told Heckle that Campo had surrendered his Chilean passport to the Dubai court as a surety in June 2002. Cacho was aware of Campo's legal problems, although Campo never mentioned them. He considered that Campo had a case to answer but the Spanish Consul concluded that Campo had no intention to clear up his legal difficulties and thought it likely that Campo was going to flee.
'My decision was very timely'! Indeed it was as had Campo stayed in Dubai he would have faced the court case on 1st June 2003. Instead he arranged to be smuggled out of Dubai – not really something he could admit to those due to speak at WineFuture Rioja!
Posted by Jim's Loire at 14:44

The sound if one hand clapping.....you are getting boring now Jim.

Sorry Anon, but I must disagree with you.

While many other people have their head in the sand over this, Jim is actually shining a light on this man's actions.

I am ceratinly not bored with what Jim has presented nor with how he has been presenting it.

Hunter S Thompson´s definition of one hand clapping in The Kingdom of Fear "Lean closer..."
http://hstbooks.org/2009/09/10/hunter-s-thompson-one-hand-clapping/

Does anyone else think that this new "anonymous" is either Pancho himself or one of his minions?

Susan. Thanks. It is possible that one of the anonymous posters is either Pancho, Melissa or a 'minion'.

Once again, in spite of anonymousness being a « custom » on blogs, I must vehemently protest against it. Give me ONE good reason to tolerate it !

Luc. Thanks. In general I'm inclined to agree. I have considered making this a names only comment blog. However, I have decided to leave the possibility of anonymous postings and continue to put libellous posts into the spam folder or deleted altogether.

Luc, I don´t work in the wine trade but members of my family do. I therefore have an interest and occasionally like to participate in these blogs. However, I´m worried that if I do using my real name, my opinions will be tied to those of my family members when they have nothing to do with them. I should hasten to add that I steer clear of posting anything libellous!

Sorry but I think my reasons for staying anonymous are very different to those of someone hiding behind anonymity to make truly wicked, vicious accusations. Jim has signed his name to every allegation he has made.

Thanks Anon. Some further comments have been moved into the spam folder.

I think Anonymous wants you to think, Jim, that if you don't shut up someone will box your ears. Why does the mention of "family" have a familiar ring to it? Reminds me of the sound of one hand that has taken money under false pretenses clapping.

No Gerry, I didn´t mean it as someone boxing Jim´s ears - just the opposite and metaphorically too. Some other anon had accused Jim of making the sound of one hand clapping and I remembered this little tale which to me seemed rather funny especially given the last line. And, who knows, maybe PC will come out of all of this a little smarter.

(and from now on to distinguish myself from the other anons I´ll sign off as Angers!)

The mink staggered sideways and screamed, grasping his head in agony. Then he fell to the floor and cursed me. ‘You swine!’ he croaked. ‘Why did you hit me and burst my eardrum?’ ‘Because ..that,’ I said, ‘is the sound of one hand clapping. That is the answer to your question. I have the answer now, and you are deaf.’ ’Indeed’ he said. ‘I am deaf, but I am smarter. I am wise in a different way.’ He grinned vacantly and reached out to shake my hand. ‘You are welcome,’ I said. ‘I am after all a doctor.’ “

wel thank you for the cut and paste Hunter S. thomsoon lesson anon. i didn't quite expect someone to reaserch it so comprehensively or Dawes to derive such a macabre albeit incorrect sentiment from it but there you go, We all see what we want to see if it suits our purpose.

I hope all of you have learned something in return today.