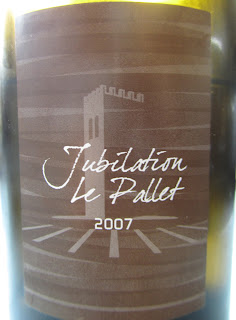 2007 Jubilation Le Pallet, Muscadet Sèvre et Maine, Les Vignerons du Pallet
The new crus communaux are a further indication that Muscadet can be a grand vin and not just a glass of something crisp and refreshing for shellfish.
Back in July last year the INAO recognised the first three Muscadet crus communaux: Le Pallet, Clisson et Gorges. Other communes are expected to follow. These cru wines are made under stricter rules than those for 'straight' Muscadet – yields limited to 45/hl/ha compared to 55hl/ha for ACs Muscadet: Sèvre et Maine, Côtes de Grandlieu and Coteaux de la Loire. The grapes have to be riper – minimum of 11% and the time sur lie is longer – 17 months for Le Pallet and 24 months for Clisson and Gorges. Due to the vagaries of the sur lie regulations these crus communaux cannot put sur lie on their labels as the current rules dictate that a sur lie must be bottled by 30th November of the year following the vintage. So 2010 sur lie had to be bottled by 30th November 2011. This seems remarkably foolish – hopefully the regulations will be amended to allow these new crus communaux to claim sur lie on their labels.
On Thursday I received four of these crus communaux to try – one from Le Pallet (the t is silent in Pallet but sounded in nearby Vallet), one from Gorges and two from Clisson. 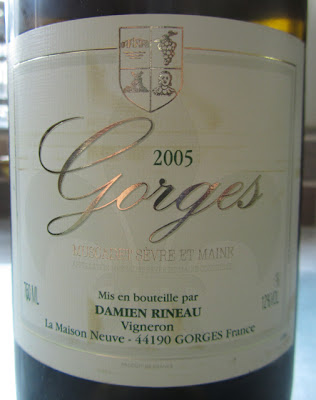 2005 Gorges, Muscadet Sèvre et Maine, Damien Rineau
On Friday we tried the 2007 Jubilation (Le Pallet) and the 2005 Gorges from Daniel Rineau tasting them and then trying them with grilled prawns followed by a grilled sea bass from Billings, our local fishmonger/butcher. Both are good wines and very different from a traditional Muscadet being richer with more body and much less lemony – more reminiscent of a coolish climate Chardonnay or perhaps an Alsace. The bottle is different too – Burgundian in style (see below).
The lightly golden 2007 Le Pallet is slightly richer than the 2005, which is a bit of a surprise given the differences between the two vintages, and the more complex. Whereas the 2005 Gorges is a little less rich in colour but has a more mineral character. Both worked well with the prawns and sea bass. Interestingly with food the two wines showed more acidity than when tasted on their own. Ready to enjoy now they can certainly be kept. 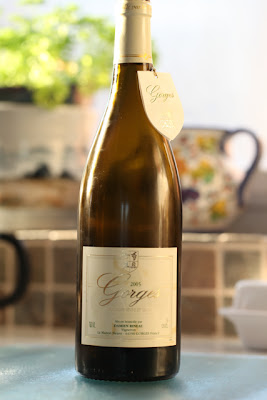 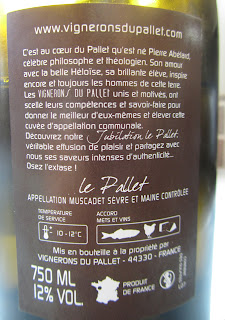 Back label of the 2007 Jubilation
Apart from sensibly recommending that Jubilation should be served between 10˚-12˚, so not ferociously chilled which will kill the complexity, this back label is rather a wasted opportunity as Les Vignerons du Pallet don't take the opportunity to say anything about this wine and how it is different from a traditional Muscadet.
The production of these crus communaux is small and likely to remain that way. Most retail for between 10€ to 15€ and offer a very good deal for the quality.
Posted by Jim's Loire at 12:02