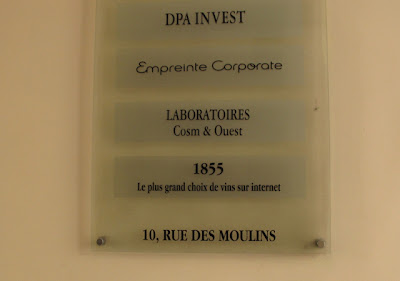 1855's offices at 10 Rue des Moulins, Paris
A report from GH on a hearing before the Tribunal de Grande Instance de Paris on 17th January 2012. This is just one example of well over 300 court cases involving 1855.
'As promised here is an update on my case. Yesterday (17th January 2012) I was at the Tribunal de Grande Instance de Paris for the hearing. As you might remember I ordered 230+ bottles of 2008 primeurs with amongst others Lafite.

After all comments on the web and more specifically LPV (La Passion du Vin), I decided not to pay the VAT and transport charges until proof of my wines being available in their depot.

1855 tried to stall the procedure and asked for a postponement given they didn't had enough time to prepare. We did assign them on December 7th, so actually there was plenty of time. This was refused by the judge so the hearing went through (a first victory given most of the times 1855 obtains a postponement).
Then 1855's lawyer explained that it was impossible for them to deliver given I hadn't paid the VAT and transport charges. They also brought in quite a few other arguments and elements of jurisprudence.


My lawyer broke every single argument of 1855 (no delivery because no payment of VAT and transport costs, wines in stock over multiple locations thus very difficult to deliver within reasonable time, ...) and at a certain point the judge was actually making fun of them! The whole room was laughing although everybody realised that this was a rather sad story too often heard.

We asked for delivery against certified check from my bank for payment of VAT and transport costs and with a penalty (500EUR per day). In subsidiary case (if they are unable to give me the bottle's) to pay back of the actual value of the bottles - around 30.000EUR.
We also asked for a bank guarantee of 30.000 euro till the moment of delivery - as to protect ourselves if they went belly up and also asked for them to pay my legal expenses.
After the hearing we had a debriefing with my lawyer and 1855s and both believed we will get a court ruling ordering them to deliver the wines within 8 days after the verdict is published (which should happen on January 31st).
Also they believed I would have some form of bank guarantee for an amount between 7.500 (amount invested) and 30.000EUR (probably around 15.000) as well as repayment of legal charges.
My lawyer really did a great job and managed to corner 1855 lawyer completely. For those interested I used DDG as a lawyer. (Pierre Deprez and Gwendoline Cattier - cattier@ddg.fr)
We met another lawyer at the hearing and knowing the number of cases in front of the tribunals (84 at the TGI, over 200 at the TI and many more at the juge de proximite) we thought about starting une action au penal, a civil suit for criminal charges against the founders of 1855. Interested parties should join because we would hit them 1855 directly in their pockets and they could possibly face prison charges and a 'cassier judiciaire'. This would really push them towards settlement.'
**
Over 300 court cases involving 1855!
This is a quite staggering number of court cases before the French courts involving 1855. No wonder the company needs frequent injections of fresh capital just to meet their lawyers' bills. GH's tip on his lawyers – DDG – may well be worth following up.
** 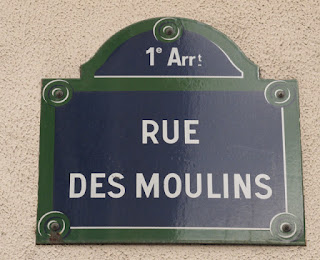 Bon Vivant: Nicolas de Rouyn: some speculation:
1855, liquidation avant fermeture définitive ?
Sans être exagérément moqueur, force est de constater quelque chose qui ressemble à un mouvement de panique chez 1855.com. Leur opération promotionnelle annuelle tourne à la grande braderie. -70 %, c’est beaucoup.
Read the rest here.
1855's share price
Since the beginning of 2012 the price has oscillated between 0.07€ and 0.06€ (opening price for 2012) with roughly equal volumes being traded at these two prices, so the article in La Revue du Vin de France doesn't seem to have affected the share price for the moment, although there are no signs so far of the price going above 0.07. Last year's high was 0.28€ with a low of 0.05€.
The Sunday Telegraph, the UK's best selling more heavyweight Sunday newspaper, has been preparing an article on 1855 and its problems, which may well appear this weekend. It has a circulation of over 600,000 copies.
**
'Management' and leading shareholder of 1855
Emeric Sauty de Chalon and Fabien Hyon are the senior 'management' team of 1855 (1855.com, 1855.con). Thierry Maincent was an administrateur and one of the directeur général délégués until he resigned his posts for personal reasons on 30th September 2010. Businessman Jean-Pierre Meyers, who is on the boards of L'Oréal and Nestlé, is a long-term shareholder of 1855. Françoise Bettencourt-Meyers, the daughter of L’Oréal heiress Liliane Bettencourt, is also an investor in 1855.
1855 is a probationary member of La Fevad.

So presumably you need a lawyer to get anything out of 1855?

JT. If you have to go to court it would seem best to be represented by a lawyer. I don't know what percentage of orders placed with 1855 end up in court.

Thank you, Jim, for the link.


It was fast, efficient and totally free. People can be represented by lawyers, but there's no point: I was actually treated better than some who were with lawyers.

I obtained a full reimbursement plus 1 500 € damages. The only cost I had to pay was that of the bailiff to recover the money (cost around 200 €).

Hi,..Thank you Julian,..i will look in to this. I placed an order over 6 weeks ago that I cancelled same day (was careless and did not check for reputation of 1855 before I placed the order,...never again).

The law states that I should get a full refund within 30 days, but so far nothing. I keep getting fobbed off. I am shocked that this daylight robbery is being allowed to take place. I'm sure if someone could follow the money trail,..it will show the dirty hands in government that are supporting this blatant and open abuse.

Hi there - I have been waiting for bottles to be delivered for 6 months whereas they should have been delivered within 48 hours. I am still waiting, what a joke... They were due to be delivered in the UK, would anyone know whether I need to go to the UK or the French court? Can you please let me know how to start the process as I have never faced this kind of issue. Thanks a lot