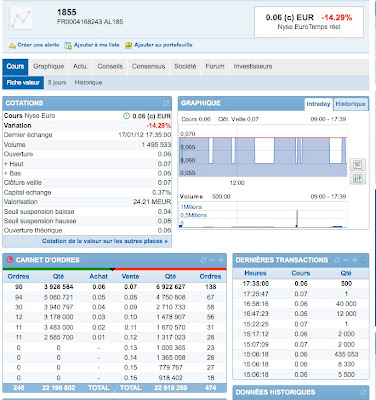 1855: screen grab of part of today's trading www.boursorama.com
Shares in 1855 fell today from 0.07€ to 0.06€ – down 14.29%. Whether this is an effect of Jérôme Baudouin's exposé in this February's edition of La Revue du Vin de France is not known, although shares in 1855 have previously touched 0.06 with a high of 0.07, which is where they closed yesterday. For much of the day shares traded at 0.06, although on several occasions a single share was traded at 0.07€ as the table bottom right above shows. 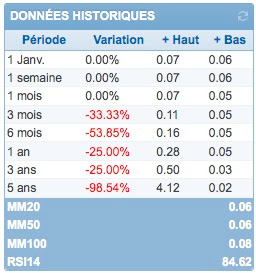 1855: share movements over the past five years
It is likely that 1855 will be very concerned that the share price does not fall further.
Posted by Jim's Loire at 22:30

Hi Jim, as you said the share price kept moving between 0.06 and 0.07 for quite some time. It's difficult to see the move to 0.06 as really significant. A move to 0.05 would be a different story. Olivier

Oliver. I agree that a move to 0.05 or lower would be more significant but the bulk of the transactions yesterday were at 0.06.

Would you advise me to buy shares at 1855 or rather at Wine Academy of Spain?

Muhammah. A tricky question, although as far as I know only 1855 is a publicly quoted company.

@Muhammad Goldberg. 1855 will eventually (hopefully) part compensate customers I feel but I recommend betting on something more certain like the beatles getting back together if you want to gamble.