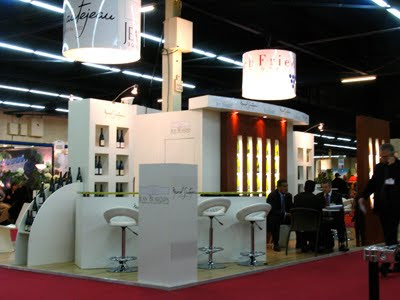 The near deserted stand of Castel Frères – Marcel Sautejeau and Friedrich: Salon 2009
The annual Salon des Vins de Loire may be held only every two years if cost cutting measures being considered by Interloire are approved. The first Salon des Vins de Loire was held in 1987 and the Loire is the only French wine region to hold an annual fair. Apparently it was the négoce who proposed cutting the budget for the Salon and to make it biannual. Looking at the photo of the virtually deserted Castel stand I can see why Castel may be wondering whether this is money well spent. However, in contrast, the Lacheteau stand (Grands Chais de France) was busy and many of the most popular growers stands are crowded with visitors.

I have been to the Salon every year since 1990 and find it a very well organised, professional and friendly show. Although I'm never able to get to see and taste with as many producers as I would like, I would certainly be very sad to see the Salon become biannual. I suspect also that commercially it would be a mistake. Many buyers come to the Salon to taste the latest vintage because the majority of the Loire's production is sold young. Buyers come to taste the latest vintage of Sancerre, Muscadet, Touraine Sauvignon, etc.

There is also a lot of pressure on the wine trade calendar. If the Salon des Vins de Loire stops for one year, will something else take its place and will visitors then return to the Salon the following year?

I gather from Charles Sydney, who lives in the Loire and is the leading courtier for Loire wines in the UK, that one plan is to run the Salon in the same year as Vinisud, so that they can be held in the same week and run transport connections between the two fairs. That assumes that buyers can afford to be away for a whole week and that the person who is responsible for buying Loire also buys the south of France. Another option being considered apparently is to hold the Salon in alternate years to Vinexpo and have a big communal Loire stand at Vinexpo. Being selfish that certainly wouldn't suit me as it is my firm principle to stay as far away as possible from the hell of Vinexpo.
Posted by Jim's Loire at 14:50