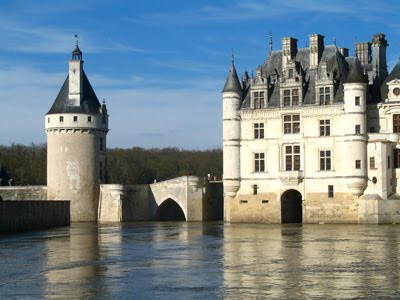 Château de Chenonceau
Jim's Loire understands that yesterday a commission from the INAO was in the Cher Valley to visit the long proposed new 'villages' appellations of Touraine-Chenonceaux* and Touraine Oisly-et-Thésée. Apparently they were happy with what they saw, although there still needs to be work done on the criteria for the reds and defining the area of the two new appellations. 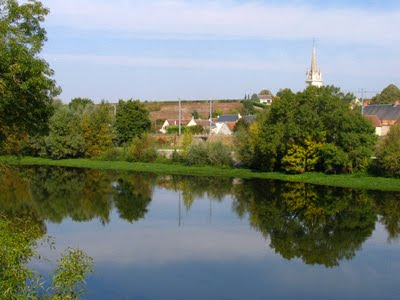 River Cher@Thésée-la-Romaine
To an extent this is good news, although I get worried when the INAO start looking at grape varieties – what should be allowed and in what proportion. One of the major characteristics of eastern Touraine is the diversity of the grape varieties used, although this is admittedly considerably reduced from what it was before the arrival of phylloxera. I fear that by the time the rules have been agreed and the appropriate French minister has found the official pen and signed the décrets it will be a complete dog's breakfast (un repas de chien complêt).

All too often the rules drawn up for some of the recent appellations appear to have been concocted by bureaucratic ideologues fuelled by high octane dogma. I've already mentioned several times in this blog how the rules for AC Coteaux du Giennois set red winemaking there back a number of years due to the INAO's insistence on making a blend of Gamay and Pinot Noir obligatory and they appear to be dead set on making the same mistake in Châteaumeillant and the Côtes d'Auvergne. Not forgetting Saint-Pourçain where the rules now demand 75% Gamay to 25% Pinot Noir. Who has ever come across a really good Gamay/Pinot Noir blend – one that was better than it constituent parts?

I fancy that if today the INAO had to approve appellations for Burgundy's Côte d'Or they would insist on a blend of Pinot Noir/Gamay – legislating that La Romanée-Conti had to include between 17.5% and 22.5% Gamay! 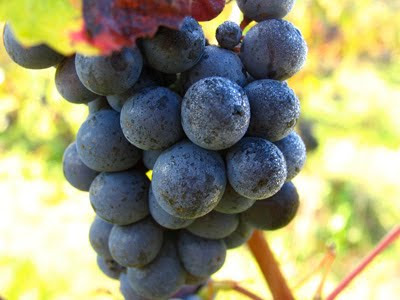 Gamay – would the INAO now insist that Romanée-Conti included a proportion of Gamay?

* The appellation will be called Touraine-Chenonceaux after the village. Chocolate Meunier, who own Château de Chenonceau (no x), apparently refused to allow the château's name to be used for the appellation. If Oisly-et-Thésée goes through there will have to be an English translation of Oisly, which is pronounced 'wali'.
Posted by Jim's Loire at 12:31

There is great, nay fantastic! Gamay/Pinot blend called "Les Tetes de Chats made by Matthieu Coste in the Giennois. (80 gamay/20 pinot) To its credit I think its bio too. In the UK from Pierre Houlier wines of Burton Rd Derby. I have no connection etc etc etc.

Thanks David. Two of his wines were supposed to have been in the big tasting I did last December of reds from the Central Vineyards. For some reason they didn't turn up. Will look out for them.