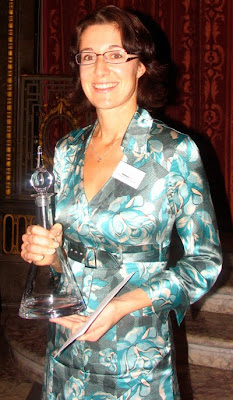 Nicola Cornelius with her decanter and cheque
Nicola Cornelius is the winner of the 2009 Young Wine Writer of the Year Award sponsored by the Circle of Wine Writers and Pavillon Books. She emerged top of a very strong field of 17 and collected a cheque for £1000 to help her travel to the wine region of her choice plus a 14-day all expenses-paid to the wine regions of Australia courtesy of Wine Australia and Qantas. She also becomes a member of the Circle of Wine Writers for a year with the opportunity of continued membership on merit and received an engraved decanter.

Nicola is the second person to be hired under Liberty Wines apprenticeship scheme. She is now completing the final months of her apprenticeship training.

Douglas Blyde and Abi Tyler were the two runners up with Christian Bailey, Lee Bishop and Emily O’Hare also on the shortlist.The presentation was made during the Circle of Wine Writers annual Christmas party, which this year was generously hosted by Wine Australia. 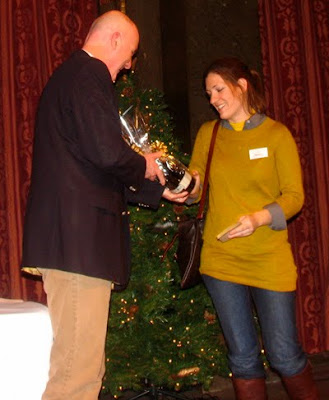 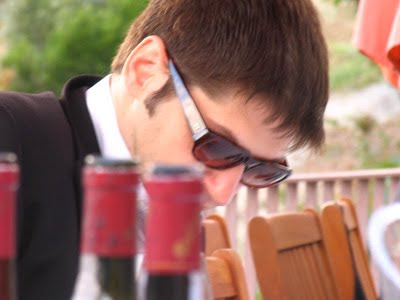 See also report on IWC podium plus video interview with Nicola, the winner. 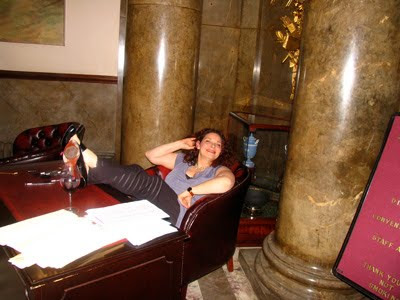 The party was so efficiently run by WineAustralia that the Circle's party organiser (Natasha Hughes) was able to put her feet up.
Posted by Jim's Loire at 23:45

Email ThisBlogThis!Share to TwitterShare to FacebookShare to Pinterest
Labels: Young Wine Writer of the Year

Jim, I hate being picky but it's John McDonnell not McDonald! He's Irish, the latter would be Scottish and God forbid anyone should confuse the two LOL.

Dermot – many thanks. You are not being picky at all – just helpful. I had tried checking his name on Google without success – now I know why.

Have corrected it. Thanks.