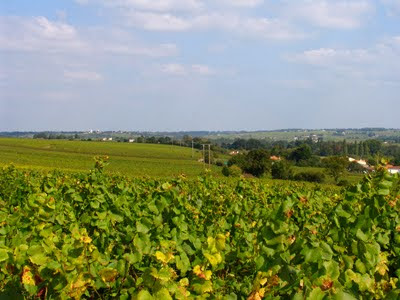 View near Le Landreau, Pays Nantais
Part report/ part comment piece here from Presse Océan that Muscadet may also be considering declaring its independence from Interloire. Not sure at the moment how formed based this report is. It would seem somewhat unlikely as the Nantais region is dominated by the négoce and Bourgueil's complaint is against the direction a négoce dominated Interloire is taking. If it made sense for the Vins de Nantes to join Interloire at the beginning of 2008 before the current economic crisis, it is difficult to see what circumstances have changed to make a withdrawal just two years later a sensible move.

It also ignores the fact that Bourgueil's declaration of independence is as much as cry to be heard than a genuine wish to try to go it alone.

Will be interesting to see if tomorrow's Interloire AGM in Nantes provides a way forward or instead deepens the sense of crisis.
Posted by Jim's Loire at 11:24