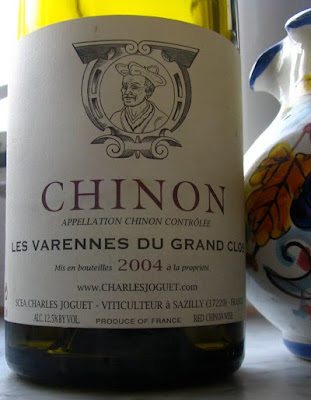 Les Varennes du Grand Clos is a 4.5 hectare parcel of vines at Sazilly (south bank of the Vienne) effectively an eastward continuation of the Clos de La Dioterie. The vines are planted on a gravel terrace with some flinty clay and limestone soil eroded from the limestone slopes. The vines were planted between 1962 and 1976. The wine spends 15-16 months in second to fourth fill barriques.
The 2004 has some of the concentration that is now a mark of the Joguet estate under François-Xavier Barc with sooty, herbal Loire Cabernet Franc aromas and flavours. It has the edginess that is a mark of many 2004s and ideally still needs more time to mellow in bottle. Alternatively I would decant it a couple of hours in advance of serving. 2004 is a more difficult vintage than 2003 or 2005 but this Les Varennes shows that good and conscientious producers can succeed despite more adverse conditions.

We tried it two evenings running. The first night with the classic Elizabeth David slow cooked pork chop, potato and onion recipe from French Provincial cooking. The match wasn't entirely successful as the sweetness from the onions and the pork hid some of the Varennes' fruit. The second evening it worked much better with lamb chops griilled simply giving the wine more volume and roundness – making it a good match. Although the remnants were kept in a half bottle in the fridge, the additional air time probably helped this 2004 to mellow further. 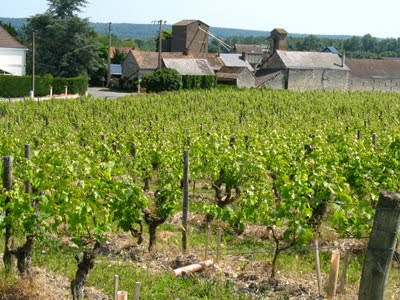 Have you noticed "bret" in Joguets wines? It seems to me that I have noticed this element more and more over the last few years.
In addition, I had a Bernard Baudry Chinon the other evening and was taken back by the amount of bret that was showing. Be assured I am not one of those new world winemakers that think everything from France is bull of bret...!

Sorry for the anonymous but I have close ties to Joguet.

Anon. Thanks for your message. I have noticed a lot of bret on the Joguet wines recently, although I'm not especially bret sensitive. It wasn't present on this 2004 nor on the two occasions when I tasted with FX at the domaine this year.

Thanks Jim for the response. Indeed, I have been tasting at the domaine for the last 7 or 8 years and I had never noticed while tasting...odd.

As a fellow fan of Cab. Franc I propose an interesting tasting of a Cab. Franc from the Finger Lakes region of Upstate New York. It will certainly be a fun thing to blind taste with your producers/friends in the Loire. Let me know how to get you a bottle and I will send it over. You won't be disappointed...

Anon. Many thanks for your message and kind offer of a Finger Lake Cabernet Franc. Please email me on budmac@btinternet.com and I'll send you an address to send it to. Best wishes Jim