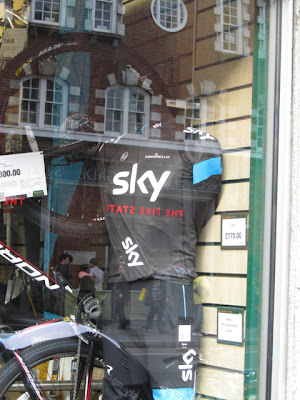 As I feared the much anticipated big sprint didn't happen yesterday due to a big crash in the peloton just before the three kilometre mark. This took out Mark Cavendish as the person who went down first was just behind Mark, Peter Sagan was also brought down and suffered some injuries but fortunately nothing major. André Griepel missed the crash but soon after had a puncture, which took him out of the running. This left Marcel Kittel in a great position, which he took convincingly winning his first ever Tour de France stage. It will be surprising if this proves to be his last.

There was confusion over the Orica-GreenEdge bus getting stuck under a banner at the finish line. Initially the finish line was moved to three kilometres from the original line and then when they eventually got the bus clear the finish was moved back to its intended place. A nightmare for the organisers. Cavendish blamed the crashes on the confusion and concern in the peloton over where the finish would actually be. Certainly this has continued Mark's running of bad luck in the Tour getting caught up in crashes in stages where he has a good chance of winning. This happened to him twice in last year's Tour.

Today's stage across the island from Bastia to Ajaccio is decidedly hilly with three - 3rd Category climbs and a 2nd Category. After the 2nd Category climb there is 65 kilometres to the finish, so it will be interesting to see if any of the sprinters manage to get back on before the finish, although the last climb (3rd Cat) is only 12 kilometres from the finish. Peter Sagan ought to be a good bet for this stage but will have to see what effect yesterday's tumble will have had.

Unfortunately Tony Martin had a bad crash yesterday. Apparently he is starting today, which may not be wise.