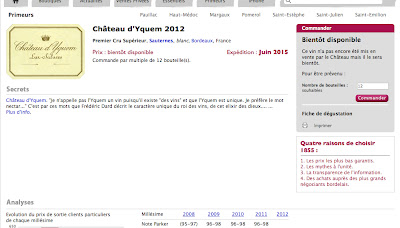 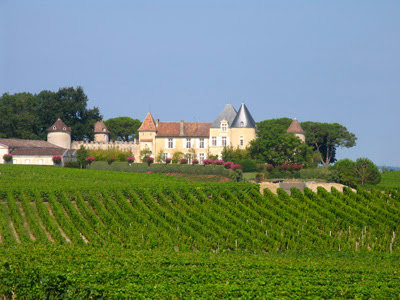 Château d'Yquem exists but not in 2012

SudOuest, Vincent Pousson and Nicolas de Rouyn (Bon Vivant blog) have revealed that the 1855 internet wine company that specialises in taking clients' money but then frequently fails to deliver wines ordered is now offering 2012 Château d'Yquem for an eventual delivery in June 2015. I should make that 'was' offering as the clowns that run this 'company' have now removed the page from the internet site.

It is well known, except clearly at the headquarters of 1855 in the Rue des Moulins in central Paris, that Château d'Yquem decided in December 2012 that, because of the adverse weather conditions, they would not be making any d'Yquem in 2012. This was reported by decanter.com and many other sources. 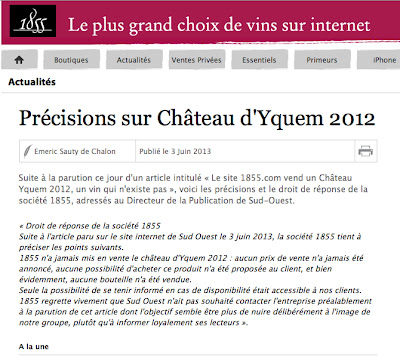 This embarrassing episode has forced Emetic Sauty de Chalon into offering an absurd explanation that they were merely making it possible to alert their clients in case the non-existent d'Yquem became available. I suspect that Sauty de Chalon is rather bemused by all this fuss as 1855 has been offering for sale for at least 10 years wines that do not exist as far as their customers are concerned. The advert for 2012 d'Yquem merely takes 1855's business model to a new level.

In the news release Emetic Sauty de Chalon complains that SudOuest by running this story has damaged 1855's reputation. Sauty de Chalon must be aware that it is he and the rest of the management of 1855 and the other companies in the group who have very successfully damaged the group's reputation by trousering their clients money and then failing to deliver.

See also a recent warning in La Revue du Vin de France about buying en primeur from ChateauOnline part of the Groupe 1855. It is clear that a growing number of Bordeaux châteaux are at last warning the public not to buy from sites owned by 1855.
Posted by Jim's Loire at 16:31

I haven't kept up with the 1855 story, but find it completely baffling that they are still trading and not all in jail.

Word verification is "dusedoo some", which almost seems to fit these people's activities !!

Completely agree Jean. It shows once again that if you know the right people nothing happens. Compare the blind eye shown to the Baumards over their '2012 Quarts de Chaume' with the legal action against Olivier Cousin.