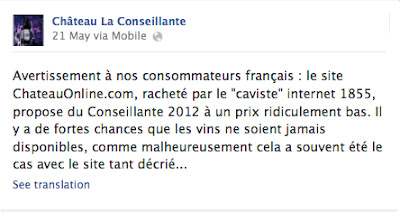 Jean-Michel Laporte, director of La Conseillante (Pomerol) has warned French consumers not to buy Conseillante through ChateauOnline part of the infamous 1855 group. Posting on La Conseillante's Facebook page Laporte warns that the price (52€ a bottle) quoted by ChateauOnline is ridiculously cheap and that the 1855 group has a long and well documented history of failing to supply wines ordered by their customers.

It is good to see a Bordeaux château coming out and warning against buying through ChateauOnline and other companies in the 1855 group. It would be even better to see other Bordeaux châteaux issuing simlar warnings.

Nicolas de Rouyn has covered this on his bonvivant blog here and includes a brief interview with Laporte.