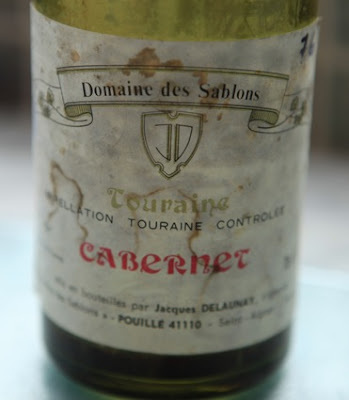 On Monday evening I finally opened the bottle of 1976 Touraine Cabernet from Jacques Delaunay, who used to own the Domaine des Sablons in Pouillé in the Cher Valley. Jacques has long retired and sold his domaine, which was then resold to Christine Lemonnier and Frédéric Bonneau in February 2010. The domaine is now called Manoir de la Vignière.

I decided to open the 1976, which I think Jacques kindly gave us while he was still running the domaine, in the name of research for a forthcoming article for Decanter on the ageability of Loire Cabernet Francs. Unfortunately the cork broke trying to pull it, so the wine had to be decanted into another bottle. Smelling the cork I had a doubt over whether the cork might have done its worst. However, the wine tasted OK – a little earthy, with definite age but a recognisable Cabernet Franc perfume and good depth of bricky red.

As well as the 1976 I'd also opened a 1999 Vieilles Vignes Saumur-Champigny from Château de Villeneuve, which we started on first with a main course of slowly roasted belly of pork. The 1999 was remarkably soft – all opulent black fruits. By the time I served the 1976 its earthiness had developed and there was a growing thought that it was corked. Furthermore the taint/earthiness was getting worse. The majority opinion was that it was corked. I still hoped that instead it was a mix of age and earthiness, especially as there was still some sweet, evolved fruit there.

You invest a lot in a bottle of old wine that you keep for a long time and are reluctant to accept that TCA has spoilt your pleasure. Eventually I accepted it must be cork and the wine was uncermoniously put aside unstoppered ready to be poured down the drain.

In the event the condemned 1976 got overlooked until last evening when I tried it again before throwing it out. The earthiness was still there but less marked as was the fruit, although a little faded but given its treatment still remarkably sweet and ripe. Instead of pouring it away, I will finish it off tonight.

The question remains was it corked or was it just its earthiness and age that deceived us? I suspect we deceived ourselves! Instead the wine showed that despite its maltreatment it hung in there.