Tim Atkin MW resigns from the Times + the future of newspapers? 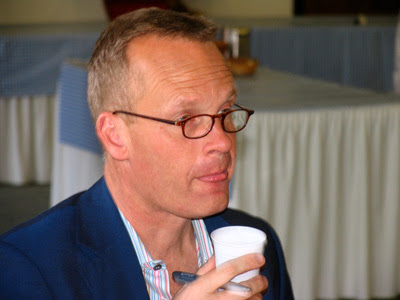 It was inevitable that this would happen after Tim's column for The Table, the Times supplement launched last spring, was cut back to a couple of bottle recommendations. See here report in harpers:

In his newsletter he said: "I have decided to resign from my role as a wine writer on The Times. The newspaper has scaled back my contribution to T2 in recent months (a depressingly familiar story in the national press) and I feel that you, my regular readers, want and deserve more in-depth pieces from me. Watch this space."
I know Tim is increasingly convinced of the potential of the internet – blogs etc. However, like all of us the big question is how to make it pay. Here is one very interesting take on how 'newspapers' could be made to pay.

Let Us Pay
John Lanchester (London Review of Books) on the future of the newspaper industry
During 2009, it was difficult to find anybody inside the newspaper business who was not profoundly depressed about the future of the industry. All the trend lines were downwards. The migration of readers and advertisers towards digital media was already a long-standing headache for the industry. Then came the credit crunch, whose aftermath brought recession, further decline in sales, and a sharp downturn in advertising. The result was industry-wide gloom.
Read the rest here.
http://www.lrb.co.uk/v32/n24/john-lanchester/let-us-pay