Pizza by the half metre and Gauby's 1999 Muntada 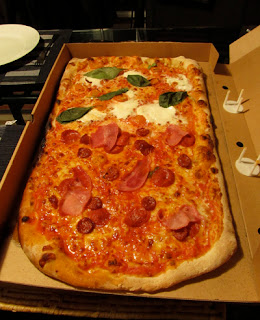 Half a metre of pizza
On Monday organised chaos returned to the flat as a cupboard in the kitchen had to be painted, so all the working surfaces in the kitchen were piled high with plates and dishes. No possibility of even boiling an egg, so it had to be a takeaway evening. Normally we go for either Chinese or Indian – often  Gurkhas  in Sydenham. However, felt like a change, so browsed through the possibilities on Just-Eat and came up with Firezza in Herne Hill, which although it is obviously an expanding company is a new name to me. Anyway they sell their pizzas by the half metre and you can choose a different topping every quarter metre.


The pizza wasn't cheap but it was good and arrived within about 35 minutes of ordering it. However, the pizzas from Fabrice in Saint-Georges-sur-Cher on a Thursday night are certainly superior and I'm pretty certain cheaper but you do have to go and collect them. 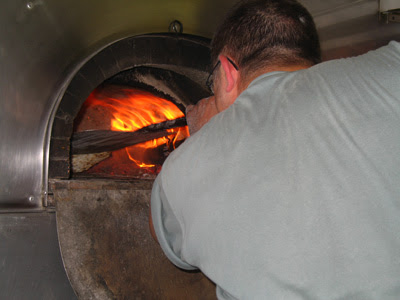 
A wet and pretty miserable November day has to finish with some red wine, although we did have a glass or so of the 2005 Pineau d'Aunis Rosé from the Clos Roche Blanche. I hadn't intended to keep this for so long but it had somehow got hidden and missed. Although still drinkable – a mellow rosé – it had lost some of its zip and freshness but it did demonstrate that a few rosés will last longer than the year following their vintage. It is also a reminder that Catherine and Didier made some Pineau d'Aunis Rouge in 2010 as part of their 'bumper harvest'. 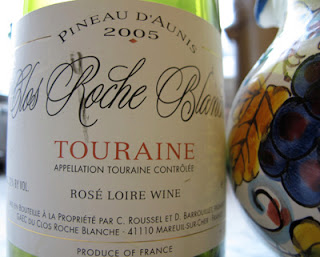 Rather like the Pineau d'Aunis, we turned up a bottle of Gérard Gauby's 1999 Muntada (Carignan, Grenache and Syrah), Côtes du Roussillon Villages. Very ripe powerful black fruits and slightly Porty – the later vintages of Muntada have more finesse, although does have complexity and is a fine bottle. Whether I would want to pay 70€, which is the price for the current vintage, is another matter. I assume that Gérard didn't really have takeaway pizza in mind when he made the 1999 but they did work reasonably well. It may not have been a marriage but it wasn't a divorce either. 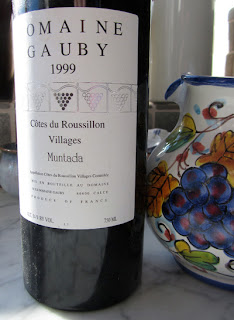 The close up of the Clos Roche Blanche Pineau d'Aunis demonstrates how sharp the macro is on the new generation of Canon compacts, especially in comparison to some of their earlier compacts where it was often very difficult to get the camera to focus when close up.
Posted by Jim's Loire at 11:20